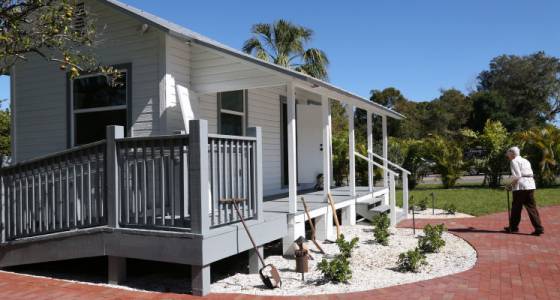 PALM HARBOR — JoAnn Tilley, 84, climbed the steps, one hand on the rail and one hand on her cane. Once inside the tiny house, she showed other visitors where she had slept as a toddler.

"I don't remember a lot because I was very, very young, but I do remember where my bed was,'' she said. "Another thing. There was (a swing) on the porch. It was my very favorite.''

Tilley, a longtime Pinellas County math teacher who retired from Countryside High in 1985, is a descendent of one of the area's pioneer families, the Suttons. Recently, she paid a visit to the Palm Harbor Museum to see the renovated, 550-square-foot Depression-era grove house, where she lived for a time with her mother and father.

The Palm Harbor Historical Society, the operator of the museum, relocated the house in 2003 from its original spot on Fisher Road, but ever since it has been shuttered from the public and used as storage space.

With the help of donations and a state Cultural Facilities Grant of about $388,000, both the museum's main structure, the 100-year-old Hartley House, and the grove house have undergone major renovations. The Hartley House was built by Thomas Hartley, who operated a citrus ladder factory on the site.

"There was no electricity or indoor plumbing,'' Tilley said. "When the sun went down, we used kerosene lamps.''

Since her father worked as a builder, the family did not live in the house long.

"My mother and I moved with him, all around Florida for his jobs, and when they decided it was time to move back, when I was in sixth grade, we moved into our own house in Dunedin,'' said Tilley, who received a bachelor's degree at Florida State and a master's degree through the University of Maryland.

Tilley, who never married, remembers spending much of her free time with the community at Curlew United Methodist Church.

Founded by her great, great, grandfather John A. Sutton, the story goes that after he built it, he wanted the church to be named after the pink curlew birds who flocked to the area. Although the birds were actually roseate spoonbills, the curlew name stuck, and not only is it on the marquee at the church but it is the name of the thoroughfare in front of the Palm Harbor Museum.

She also remembers summer days swimming in the Gulf of Mexico.

"When I was young, I remember playing a lot outside, just running around. I'd have to say one of my favorite places to go was Clearwater Beach,'' she said. "Everybody would meet down there. It looked so different than it does now.''

Pinellas County's landscape in the mid-20th century was dotted with cows and dairy farms, citrus trees and working orange groves, and with it came activities through organizations like 4-H. While the boys seemed to gravitate toward the livestock activities, many girls, including Tilley, focused on sewing and canning.

"4-H was a big part of life for children and certainly influenced my life,'' said Tilley, who eventually served as a 4-H extension agent with a variety of assignments, including one in Hawaii.

But she always came home to Florida.

"When I was growing up, we certainly didn't have locks on our doors. It was a different time,'' she said. "I think having the grove house open to the public is a good way to keep that history alive. It's important to appreciate the past.''

The renovations also include a new collections area, an attached gazebo and refurbished wooden floors inside the Hartley House as well as additional walkways and drought tolerant landscaping throughout the property. New exhibits include one on the Greater Palm Harbor area's early postal service with a display of diaries belonging to JC Craver, Palm Harbor's first postmaster (inside the Hartley House), and one inside the grove house, showcasing North Pinellas County's ties to the citrus industry.