New for Cedar Point in 2017: Virtual reality Iron Dragon, Melt Bar and Grilled, but what about Mean Streak? (photos)

SANDUSKY, Ohio - Winter returned to Northern Ohio on Saturday, but hundreds of diehard Cedar Point fans had summer on their minds as they toured the park and heard about new attractions for 2017. The big news: * The roller coaster Iron Dragon will add... 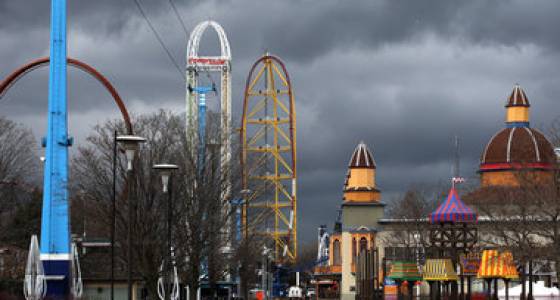 SANDUSKY, Ohio - Winter returned to Northern Ohio on Saturday, but hundreds of diehard Cedar Point fans had summer on their minds as they toured the park and heard about new attractions for 2017.

* The roller coaster Iron Dragon will add a virtual-reality component, available nightly starting at 6 p.m., June 9 through Sept. 4. Cedar Point tested the virtual-reality experience last summer to positive reviews; riders don VR headsets, programmed with 3-D imagery, while enjoying the hills and curves of the ride. During the day, the ride will operate without the virtual reality option.

* Melt Bar and Grilled, the popular Cleveland eatery, will add an outpost to Cedar Point, opening in late May. It will take over the space formerly occupied by Joe Cool Cafe, just off the main midway.

* RipCord, the bungee-like ride formerly located in the Challenge Park area, has been moved to Frontier Trail, on the former site of Shoot the Rapids, and renamed Professor Delbert's Frontier Fling.

What fans didn't learn much about: The ongoing conversion of Mean Streak, the massive wooden roller coaster that is being transformed into a new ride at the back of the park.

Cedar Point officials acknowledged the conversion with a photo of a small section of new, dark red steel track, already installed atop the wooden base. But they provided no details on what the finished ride would look like or when it would open.

"When will we tell you what's going on? When it's in the best interest of the Cedar Point business," said Jason McClure, Cedar Point's vice president and general manager, to a smattering of boos from the audience at the Lakeside Pavilion.

More than 800 park fanatics showed up for the fourth annual Winter Chill Out event, a fund-raiser for A Kid Again, which provides assistance to families with children battling life-threatening illness. The event started with a two-hour tour of the park and ended with a 30-minute presentation by Cedar Point officials.

The event raised $40,000 for the charity, according to Tony Clark, Cedar Point's director of communications.

"It's great to come in the off-season, to see all the behind-the-scenes stuff, to see how they make everything work," said Amy Grant, a Cedar Point season-passholder from Pittsburgh. "It's worth the $50. It's for a good cause."

Among the rarely seen areas on display Saturday: the maintenance facility, where cars from popular coasters Millennium Force, Top Thrill Dragster and Maverick were being worked on in various stages of disassembly and repair.

Guests also walked by the Hotel Breakers, the historic, lakefront hotel, which is getting a major expansion - a six-story, 150-room tower addition that will open in 2018.

Visitors also got to see progress on the expansion of Cedar Point's waterpark, formerly Soak City, which will open in late May as the new Cedar Point Shores. Among its new features: Point Plummet, a six-story, thrill-slide complex with trap floors; a zero-entry pool with kid-friendly slides; Crystal Rock Cafe and Bubbles Bar.

Pooch, talking to guests near the waterpark construction site, was also asked about Mean Streak - clearly under construction and visible in the distance. He said he couldn't talk about it.

Members of the media, as well as guests, were prohibited from taking photos of the coaster as they walked by.

But guests were willing to speculate about its future.

"When it opens it'll be a ride unlike any we've seen before, there's no doubt about it," said Adam Gringnon, a coaster fan from Detroit. "It's kind of exciting not knowing anything."

The coaster, which debuted in 1991, had fallen out of favor in recent years because of its rough ride. Cedar Point closed the coaster in mid-September.

Not long after, construction crews from Rocky Mountain Construction showed up on the site and began removing track from the ride. The company, based in Idaho, is well known by amusement-park enthusiasts for its conversions of wooden roller coasters to steel-hybrid coasters, which are much smoother and more thrilling.

Despite the visual evidence, Cedar Point officials said they're not ready to talk about the project yet.

"We can't deny what's there," said McClure. "But we're still not ready to share the details."

Officials did make several other announcements about 2017. Among them:

* An expansion to the Barnyard petting zoo area, which will add more animals, including yaks and a second camel. "In the exit surveys, our camel said he was lonely," said Jerry Niederhelman, vice president of operations. The Barnyard will also add pony rides.

* A new drink plan for season passholders. Drink plan participants have long complained about having to carry around a refillable bottle all day. This year, they'll have the option of getting drinks in disposable cups.

* A new show, "Lights, Camera, Action!" which will feature live music from popular movies, in the Jack Aldrich Theatre.

Cedar Point opens for the season on Saturday, May 6.