Former U.S. Labor Secretary Tom Perez, newly elected chairman of the Democratic National Committee, said Sunday that a united party will be Donald Trump's worst nightmare.Perez spoke on three political talk shows a day after he was a elected to lead a party... 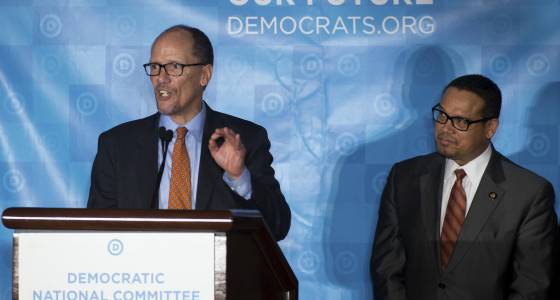 Perez spoke on three political talk shows a day after he was a elected to lead a party struggling for direction and riven by internal conflicts after Hillary Clinton's upset loss to the billionaire real estate developer in November. He vowed to "lead with our values" to reconnect with voters who fled the party after feeling overlooked.

The first Latino to head the Democratic Party, Perez nonetheless represents continuity for the party establishment after serving as labor secretary and assistant attorney general for civil rights in President Barack Obama's administration.

His first action as chairman was to name his rival for the top DNC role, Minnesota Rep. Keith Ellison, as deputy chair; Ellison responded by urging his supporters to work with Perez.

"Congressman Ellison and I are united, and our Democratic unity is Donald Trump's worst nightmare," Perez said on ABC's "This Week."

After falling one vote short in a first round of balloting, Perez defeated Ellison 235-200 in the second round. The first Muslim elected to Congress, Ellison had backed Vermont Sen. Bernie Sanders over Clinton in the Democratic primaries and represented calls within the party for a harder turn to the left and to populism in response to Trump's rise.

Trump on Sunday tweeted that the "race for DNC Chairman was, of course, totally 'rigged' " in favor of Clinton's choice. Saturday night, Trump had congratulated Perez on Twitter and said "I could not be happier for him, or for the Republican Party!"

Democrats have been struggling to understand what happened in the election and to determine how to move forward from their worst national electoral position in decades. As well as losing the White House, Democrats are the minority in both chambers of Congress and hold only 16 governorships. During Obama's eight years in the White House the party also lost hundreds of seats in state legislatures. Outside groups are jockeying for influence and donors, while anti-Trump protesters are grappling with how to translate their anger into action and change.

The DNC has largely been in suspended animation since November, waiting for a new chair before hiring additional staff and starting the post-election work of its Unity Commission, which will consider changes to the party's primary process.

Perez wouldn't say whether he intends to launch an "autopsy" report like the one that Republicans conducted after their losses in 2012. He committed to surveying DNC members on what they see as the committee's failings and to work on "internal culture change." He also pledged to use the party structure to reach out to progressive groups including unions, Planned Parenthood and grassroots protest groups that are cropping up across the country.

The son of Dominican immigrants, Perez grew up in Buffalo, New York, and worked his way through Ivy League Brown University as a garbage collector and dining hall worker. He earned a master's degree in public policy and a law degree at Harvard University before going on to clerk in Colorado, joining the Justice Department's Civil Rights Division, advising Massachusetts Sen. Ted Kennedy and serving as Maryland's labor secretary.

Obama nominated Perez in 2009 to serve as assistant attorney general for civil rights. There, he played a key role in efforts to aggressively enforce and expand civil rights law, including fighting voter identification laws.

In Obama's second term, Perez served as labor secretary after being confirmed along party lines. In the DNC race, he said his experience leading the 17,000-employee agency made him well-suited to restructure a party in need of stronger organization.

While Obama and Clinton chose not to take sides publicly in the race, former Vice President Joe Biden backed Perez, as did Virginia Gov. Terry McAuliffe, a close Clinton ally.

Obama released a statement after the vote lauding Perez and praising him for giving a prominent role to Ellison; Bill and Hillary Clinton both tweeted their congratulations.

"If you came here supporting me, I'm asking you to give everything you've got to support Chairman Perez," Ellison said on Saturday. "We don't have the luxury, folks, to walk out of this room divided."

Ellison donned a "Team Tom" button while Perez pinned on a "Keith for DNC" one as they stood side-by-side to warn of threats too serious to be derailed by intra-party scuffles. "The very fate of our nation is in the balance," Ellison said.

Ellison said he intends to keep his seat in the House and suggested that he could serve as a liaison between the party and members of Congress.

The Minnesotan courted DNC voters with the promise of unity after the contentious 2016 primary campaign between Clinton and Sanders, and rounds of recriminations after Clinton's loss. He was endorsed by Senate Minority Leader Chuck Schumer of New York, Sen. Elizabeth Warren of Massachusetts and Sanders, and had the backing of pro-Sanders groups including his Our Revolution group.

Perez "has a real opportunity on his hands. And I hope he seizes it. And that is to understand that, in fact, the way the Democratic Party has been run for decades has not worked," Sanders said Sunday on CNN's "State of the Union." "We need a total transformation."

On ABC, Perez said the Democrats' turnaround starts "by building strong parties in the 50 states and the territories." It's now recognized, he said, that Democrats didn't invest enough in grass-roots organizing in recent years. "We need an every zip code strategy. We need to redefine the role of the DNC so that we're helping to elect people from the school board to the Senate."