SALEM -- A freshman state representative filed legislation Tuesday that would lay groundwork for constructing a new highway west of Interstate 5 through Washington County and up over the Columbia River. Shying away from the much-maligned Westside Bypass moniker,... 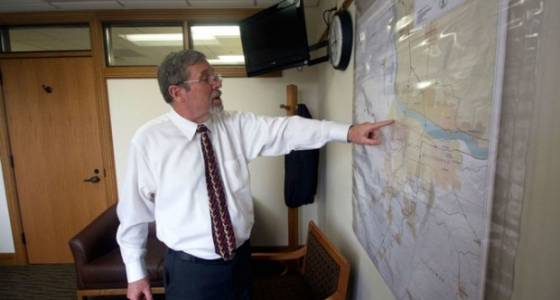 SALEM -- A freshman state representative filed legislation Tuesday that would lay groundwork for constructing a new highway west of Interstate 5 through Washington County and up over the Columbia River. Shying away from the much-maligned Westside Bypass moniker, the bill's chief sponsor, Rep. Rich Vial, R-Scholls, is giving his dream road a new name: the Northwest Passage.

The bill is hugely ambitious, a fact not lost on Vial, who has likened himself to the ever-optimistic Don Quixote.  And it comes at a time when lawmakers are fretting over a projected $1.7 billion state budget deficit.

Separately, a select group of legislators are working to pass a massive statewide transportation spending package aimed at maintaining and preserving Oregon's roads and bridges and reducing metro-area traffic.

But Vial said his bill, House Bill 3231, is in a category of its own because the limited-access highways it permits would be financed with tolls, bonds or local taxes instead of state or federal money. Vial declined to say how much each toll may cost drivers, but said the total bill for constructing the Northwest Passage could reach $12 billion to $20 billion.

He also said his idea is different from the Westside Bypass -- a plan killed and resurrected time and again over three decades -- because it would allow local governments to set their own plans.

"It only authorizes local communities to come together," Vial said of the bill. "It doesn't have a route statement with a funding source behind it."

If passed, HB 3231 doesn't guarantee that a special district would form to build the Northwest Passage. But, voters could eventually elect city and county representatives who favor the idea, Vial said.

He declined to map the exact route he imagines for the Northwest Passage highway, saying that decision would be up to elected special district members. But, he said the highway might veer west of I-5 near Hubbard and rejoin it near Ridgeland, Wash., after crossing the Columbia River at Columbia City or St. Helens.

Under Vial's bill, special districts would be given broad powers to claim land for constructing a limited-access highway, including condemnation and right-of-way powers. The district would also be able to override local designations that protect "rural reserve" land. Vial said he's aware that aspect of the bill will likely rankle some environmentalists.

"It would be disingenuous of me to try to argue anything other than, 'Yep, some are going to be troubled by this,' " he said.

Despite obvious hurdles -- both political and environmental -- Vial is undeterred, saying a limited-access highway west of I-5 is needed regardless. Rush-hour congestion on I-5, U.S. 26 and OR 217 particularly rile commuters from Washington County as well as other areas of the Portland metro area and Southwest Washington.

"Heck yeah it's ambitious. But the whole point is we have to be ambitious or nothing will get done," he said. "Ultimately, this is simply my attempt to allow us to look bigger than anything we've been doing, which really isn't solving our problem."

Vial said his idea for the Northwest Passage germinated from trips to his law firm's Colorado office, where he frequently drove a road called E-470. The 47-mile highway bypasses Denver and was built by a special district that paid for the project with tolls instead of state or federal funding or tax increases.

Today, E-470 has one of the most expensive toll rates in the country, according to the Denver Post, with a price of up to $17.45 for cars and $69.80 for trucks to drive the entire highway. But, 25 years after its opening, E-470 is bringing in more drivers and more money than expected.

Back in his district, which extends across Wilsonville, Sherwood and up to Reedville, Vial said constituents told him loud and clear: Fix congestion issues in Washington County. So, he sought the advice of former Colorado Gov. Bill Owens, who headed the state while E-470 was under construction, and got to drafting his bill.

But local governments officials aren't lining up to support the plan. In separate statements to The Oregonian/OregonLive, Hillsboro Mayor Steve Callaway and Washington County Board Chairman Andy Duyck applauded Vial for his creative thinking, but said their focus is elsewhere -- chiefly on the Legislature's developing transportation package.

"We thank Representative Vial for his interest in addressing the long-term transportation needs on the west side of the Portland region," Duyck said. "The Legislature needs to focus on a statewide package to address three major bottlenecks in our region, including Highway 217, the I-5 Rose Quarter area and I-205."

And, at least one lawmaker already stands against Vial's proposal. Rep. Julie Parrish, R-West Linn, said she remains categorically opposed to any legislation that could result in tolling and worries about how special districts would handle right-of-way acquisition for building a big new highway.

"People in my district really don't like tolls," Parrish said.

Vial said he hopes to convince Parrish of his views.

Officials working in St. Helens, Scappoose and Woodland, Wash. -- cities the Northwest Passage may go through or beside -- said Tuesday that they hadn't heard of Vial's plan.

"We've done a fair amount of analysis of what some kind of crossing or bypass might look like, but it hasn't really ever gone anywhere," said St. Helens City Administrator John Walsh, who added that Vial's proposal is "intriguing."

Scappoose Mayor Scott Burges said regional congestion is "definitely an issue that needs to be solved," but declined to comment on Vial's plan because he was unfamiliar with its details.

For his part, Vial said he's thinking big and going full steam ahead with his plans -- despite reticence from other legislators.

"A lot of the senior members in the Legislature are like, 'Oh Rich, that's such a nice idea. Go at 'em. Good for you.' And I believe that their time in the Legislature has left them with knowledge that I'm maybe blessed not to have," he said. "The reality is that you only get to be ignorant once and sometimes that's a blessing."