In a back-and-forth contest, the Montgomery High School girls basketball team edged Acalanes 53-50 in an NCS Division 2 semifinal matchup Wednesday night.The No. 2-seeded Vikings’ reward for winning is to play powerhouse No. 1 Miramonte of Orinda — a... 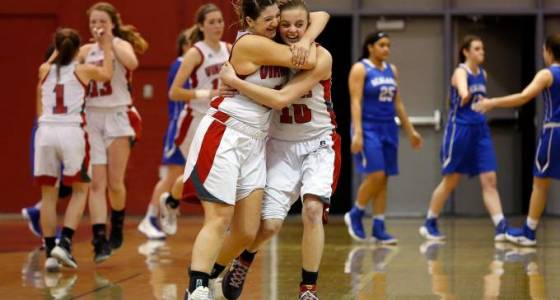 The No. 2-seeded Vikings’ reward for winning is to play powerhouse No. 1 Miramonte of Orinda — a team that beat Montgomery by 44 points in the second game of the season — in Saturday night’s section final.

“If we can get good spacing on our shots we will see what happens,” Montgomery coach Darryl LaBlue said. “It’s just a matter of trusting in what you are doing.”

Against Acalanes of Lafayette, Montgomery (24-6) needed Julia Watson to can two free throws with eight seconds left for a 53-50 lead. The Dons (26-3) missed a three-point desperation shot at the buzzer.

Montgomery had 14 turnovers in the first half and only four in the second half.

“We took care of the ball in the second half,” LaBlue said. “Our defense really stepped up in the fourth quarter.”

Montgomery was paced, as usual, by Shayla Newman, with 21 points and 6 rebounds. Teammate McKenzie Weinmann had 11 points, including a crucial 3-pointer that spurred a 7-0 run midway through the fourth quarter. Ivy Lea hauled down 14 rebounds for Montgomery.

Veronica Marrone had 20 points for Acalanes.

By the time the first quarter was over, the Division 4 semifinal was well in hand for the No. 1 Cardinals (27-3). The visiting No. 5 Wildcats (19-11) of Kentfield were shell-shocked early, down 24-2 to start the second quarter and trailed 41-10 at halftime.

Cardinal Newman has an opportunity Saturday at 7 p.m. to win its first NCS title in the six-year history of the school’s girls basketball program. The Cardinals won the Division 4 California state title last year but were the runner-up in the NCS.

Against the overmatched Wildcats, it was just another ho-hum night for the well-oiled Cardinal Newman machine. The Cardinals held an 18-2 edge in offensive rebounds, which gave them plenty of second-chance opportunities.

“We had a great first quarter. The girls were well-focused and they were very active defensively,” Mertle said. “We were well-balance offensively.”

The Cardinals were led by Mia Flores with 14 points and Lauren Walker with 10 points.

Marin Catholic was led by Miranda Jacobsen with 10 points.

The bad news for the No. 7 Montgomery boys’ basketball team on Wednesday night was the 57-48 loss to No. 6 Tamalpais (Mill Valley) in a NCS Division 2 semifinal.

The good news is that the Vikings’ season is not over, since they qualified for the NorCal playoffs starting next week.

“We will be playing in NorCals and will probably be on the road against a pretty good team,” Montgomery coach Zac Tiedemann said. “Tonight we didn’t shoot the ball well. Give credit to Tam; they are a good team.”