NBC-5 news anchor Rob Stafford has been diagnosed with a rare blood disorder and will take a leave of absence from the station for several months as he undergoes a bone marrow transplant and chemotherapy.Stafford credited his wife, Lisa, for pushing him to... 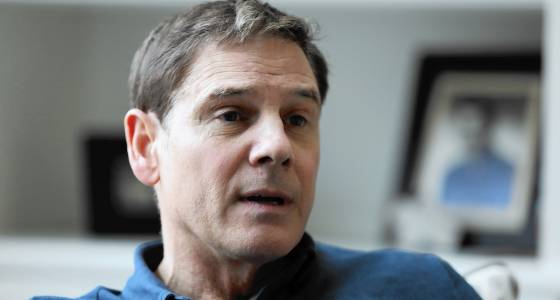 NBC-5 news anchor Rob Stafford has been diagnosed with a rare blood disorder and will take a leave of absence from the station for several months as he undergoes a bone marrow transplant and chemotherapy.

Stafford credited his wife, Lisa, for pushing him to get an early diagnosis that doctors say greatly improved his prognosis. He is scheduled to begin treatment Friday at the Mayo Clinic in Rochester, Minn.

"I spent my whole life asking questions, but I asked very few questions about my own health because all I wanted to hear is I'm OK," Stafford said in an interview at his Hinsdale home Tuesday. "You have to ask questions."

Stafford told colleagues at WMAQ-Ch. 5 about his illness in an email Wednesday morning and planned to announce the news publicly Wednesday at the end of the 10 p.m. newscast.

He expects to be away from his desk anchoring the 5, 6 and 10 p.m. weekday news for four to six months while at the Mayo Clinic. Doctors there say Stafford is in the early stages, Stage 2, of the disease, which can lead to heart failure and death if undetected.

Stafford's disorder, called amyloidosis, occurs when an abnormal protein called amyloid is produced in bone marrow that can be deposited in tissues and organs. There are more than 40 types of the disorder that affects the heart, kidneys, liver, spleen, nervous system and digestive tract. Stafford's type — known as light chain amyloidosis — is rare, with fewer than 2,000 or so cases diagnosed in the U.S. each year, according to Dr. Ronald Go, Stafford's hematologist at the Mayo Clinic. Doctors are optimistic he will go into remission after treatment.

ABC-7 sportscaster Mark Giangreco, who in a tweet Sunday referred to President Donald Trump as a "cartoon lunatic" and America as "a country full of simpletons," has been suspended.

ABC-7 sportscaster Mark Giangreco, who in a tweet Sunday referred to President Donald Trump as a "cartoon lunatic" and America as "a country full of simpletons," has been suspended.

Before his diagnosis in January, Stafford had noticed lower energy levels while biking the Cal-Sag trail and hiking through the Rocky Mountains while on vacation. But the 58-year-old award-winning investigative reporter and father of three adult children dismissed the episodes as signs of getting older, he said.

After a physical detected slightly high cholesterol levels and more than usual amounts of protein in his urine, both indicators that his kidney had been damaged as a result of the blood disease, Stafford's wife insisted that he take the symptoms seriously.

"I believe there's a reason that this happened, and I think there's a calling that is to let people know the importance of early detection," said Lisa Stafford, his wife of 30 years who owns a medical marketing and communications company. She plans to stay with Stafford in temporary housing near the Mayo Clinic as he undergoes treatment, lives in a sterile environment and rebuilds his immune system while recovering from the effects of chemotherapy.

Mike Adamle on his CTE symptoms: 'It shook my world' Phil Thompson

Chicago sportscaster Mike Adamle has post-traumatic epilepsy, dementia and the symptoms of Chronic Traumatic Encephalopathy, the result of years playing football, he revealed in an interview with NBC-5 colleague Peggy Kusinski.

"It shook my world and it just got kind of a little bit worse sometimes...

Chicago sportscaster Mike Adamle has post-traumatic epilepsy, dementia and the symptoms of Chronic Traumatic Encephalopathy, the result of years playing football, he revealed in an interview with NBC-5 colleague Peggy Kusinski.

"It shook my world and it just got kind of a little bit worse sometimes...

In his email to fellow staffers, Stafford joked that he did not wait for the end of sweeps to schedule treatment, but that Friday was the first opening on the Mayo schedule after Stafford completed all the required medical tests.

"I consider this early diagnosis a gift that left to my own devices I would not have received," Stafford wrote. "I'm going to take full advantage of my good fortune and hit this head on with the most aggressive and proven treatment available."

Stafford joined NBC-5 in 2009 after working as a Chicago-based correspondent for Dateline NBC for 11 years. Prior to that, he was a general assignment reporter at CBS2 Chicago. He has won two national and seven local Emmy awards, and an Edward R. Murrow award for a Dateline investigation into racial profiling.

Stafford said his experience meeting and interviewing people in the news, often "on their worst days," has allowed him to keep his health issues in perspective.

"This thing pales in comparison to 95 percent of the stories I do on a daily basis," said Stafford, who added that his work as a journalist also has helped him to seek out the best support, medical opinions and advice about the disorder.

"You're rescuing your bone marrow by the stem cells that you stored," Go said.

Although Stafford's parents were both treated for cancers in their 50s, doctors do not know the exact cause of Stafford's illness and do not believe it was is hereditary. Risk factors for amyloidosis include exposure to chemicals, radiation and aging, Go said.

Stafford confided in his NBC-5 co-anchor, Allison Rosati, and meteorologist Brant Miller about his illness shortly after his diagnosis in January. As medical tests forced him to travel, he alerted NBC-5 managers, who encouraged Stafford to do whatever it took to get the medical attention needed, he said.

"Rob is loved by his colleagues in the newsroom. We are encouraged by the news that his illness was detected early, and that he is in the excellent hands of the top doctors at the Mayo Clinic. We all wish Rob the best of luck in the weeks ahead, and we can't wait for his return to the newsroom," station manager and vice president of news Frank Whitaker said in an email.

NBC-5 weekend anchor Dick Johnson will be filling in for Stafford during his absence.

Stafford is expected to lose his hair as a result of the chemotherapy and has experienced weight loss. Doctors have encouraged him to pack on a few pounds in anticipation of further weight loss. He's obliged by indulging on Girl Scout cookies, deep dish pizza, cheeseburgers and milk, he said.

Stafford said he is trying to take emotion out of his upcoming battle, which he is approaching as a fight that he plans to win.

"I am not freaking out because I really am confident I am going to get through this," he said.

Lisa Stafford will be posting updates about her husband's condition on a blog: staffordrecovery.com. Rob Stafford also will offer updates on his Facebook Fan page.

Stafford's announcement came less than 24 hours after Hosea Sanders, veteran news anchor at WLS-Ch. 7, announced on his Facebook page he will undergo surgery for prostate cancer and that he was "very optimistic about the outcome."

Sanders told social media friends Tuesday night that he had been diagnosed several weeks ago and would be taking some time off from the ABC-owned station, for which he anchors the 7 p.m. newscast each weeknight.