Residents of communities in north-central Illinois on Wednesday determinedly began the process of putting their towns and lives back together after tornado-producing storms a day earlier left one man dead, several injured and dozens of buildings leveled."Last... 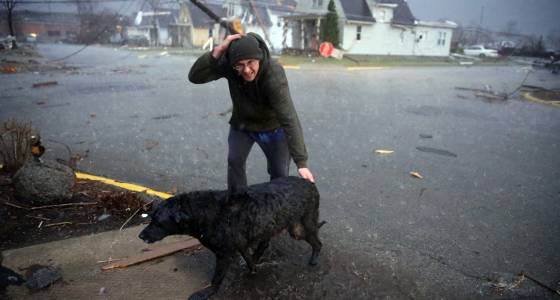 Residents of communities in north-central Illinois on Wednesday determinedly began the process of putting their towns and lives back together after tornado-producing storms a day earlier left one man dead, several injured and dozens of buildings leveled.

"Last night everyone was in shock," Naplate Mayor Jim Rick said of his town, 3 miles southwest of Ottawa in LaSalle County. "I think this morning we see it, we'll address it and we'll come through it."

As Rick spoke, residents of the small town of 550 were surveying the aftermath under blustery, overcast skies. Some homes appeared essentially unscathed, while next to them were homes and garages that had been reduced to kindling.

The streets, which had been mostly cleared, were busy with contractors, police and firefighters. Meanwhile, crews were working to repair downed electric lines, and officials from Ameren Illinois said they expected to restore power to most of the 9,500 customers who lost service in the area by the end of Wednesday.

From his front yard, Jerry Nanouski, 60, looked at the pile of rubble that used to be his garage. The storm had carried his Corvette a block away and left its rear window missing.

A weather system moved across Illinois on Feb. 28, 2017, producing tornadoes and severe storms that killed at least two people and damaged property.

Nanouski had just arrived home from his job as a Police Department lieutenant in nearby North Utica on Tuesday afternoon when the storm struck. All the windows in his home were blown out and the interior was severely damaged, but he said his family and his police dog escaped uninjured.

It brought back memories of the night in April 2004 when he was on duty in North Utica and a devastating tornado ripped through the small town, killing eight people.

"It's the same thing," he said. "It happens so quick, and when it's all over, it's just devastation. Hopefully (the recovery) will be the same. They made good progress over there (in North Utica) when they were pulling it back together, and hopefully we can do the same. Get people back on their feet. Rebuild."

No one in Naplate was badly hurt, even though the tornado damaged or wrecked 50 of the village's 250 homes and structures, officials said.

Ottawa officials reported one fatality from the severe weather that hit their town about 4:45 p.m. Tuesday. The victim, Wayne Tuntland, 76, was killed when a tree fell on him, the LaSalle County coroner's office said.

Rich Ploch, chief deputy in the coroner's office, said Tuntland and an unidentified middle-aged man were in the backyard burning debris when the storm came through.

"A family member went outside to tell them the storm was approaching," Ploch said. "It looks like they were in the process of returning to the home. Unfortunately, the tree came down on them."

Wayne Tuntland, 76, of Ottawa was killed when a tree fell on him outside his house during Tuesday's violent storm. (John Keilman/Chicago Tribune)

Wayne Tuntland, 76, of Ottawa was killed when a tree fell on him outside his house during Tuesday's violent storm. (John Keilman/Chicago Tribune)

In far southeastern Illinois near the Indiana border, a 71-year-old man was killed when a twister struck a small building near a house in the Crossville area, according to authorities. The man's wife was injured.

At least 14 people were injured during the storm in the Ottawa area, according to a news release from St. Elizabeth Medical Center in Ottawa. The hospital treated people for injuries to their heads, knees and arms.

In the neighborhood of South Ottawa, the tornado's fickle path was clear. Some streets Wednesday morning were a jumble of tree limbs and dangling power lines; other streets were almost entirely free of debris. Some houses were wrecked; others nearby appeared untouched.

Anne Houk surveyed the damage outside her bungalow. Her front lawn was covered in branches, and a large piece of soffit hung from a nearby tree. Her garage was blocked by another tree, and the rear windshield of her car was blown out.

Still, with her house mostly unscathed, she counted herself lucky.

"We fared pretty well compared to other people," she said. "We're thankful for the brick. The three little pigs did it right, I guess."

Mike McGrath sat late Tuesday in the Village Hall in Naplate, wearing the wry smile of someone who had just experienced the best and worst of luck.

On Tuesday afternoon, he and his wife had been at home watching TV for news of an incoming tornado when the announcer said, "It's here."

McGrath, 65, glanced out the back window and saw that the sky had turned as black as midnight. Instantly, he and his wife fled into a central room and huddled in a corner.

"It seemed like it lasted forever, though I know it was only like a minute and a half," he said. "Then it was quiet. I got up, surveyed the damage and pretty much couldn't believe what we saw. Still can't believe it. … (The house) is pretty well gone. My whole neighborhood is pretty well destroyed."

Tornado touches down in Ottawa as storm system hits Illinois

A tornado touched down in Ottawa, Ill., on Feb. 28, 2017, as part of a system that produced severe weather across Illinois on Tuesday night. (Nuccio DiNuzzo / Chicago Tribune)

A tornado touched down in Ottawa, Ill., on Feb. 28, 2017, as part of a system that produced severe weather across Illinois on Tuesday night. (Nuccio DiNuzzo / Chicago Tribune)

McGrath and his wife, though, were uninjured.

"We've got to count our blessings," Rauner said at a news conference outside a glass factory in Naplate that was damaged by the storm. "This could have been way worse. The warning system worked well. People were notified, and it's wonderful how people in the community helped each other."

In Oregon, about 100 miles west of Chicago, officials said the tornado that touched down Tuesday left the community relatively unscathed.

"Overall, I just have to say we were pretty darn lucky," said Ogle County Emergency Management Agency coordinator Tom Richter. "We have four damaged homes, five destroyed outbuildings and two outbuildings damaged. Luckily, we didn't have any injuries — no injuries at all."

Richter said the storm heavily damaged some areas of old growth forest and knocked out power to about 110 residences. Power had been restored by Wednesday afternoon, he said.

Connie Brooks, director of LaSalle County Emergency Management, said LaSalle County, Naplate and Ottawa have all declared themselves disaster areas, and that all contractors and insurance adjusters have to register with local authorities before they will be allowed in.

Brooks asked people who want to go to the area to help residents with the cleanup to stay away for the time being.

"The streets are not safe yet … the city and the village are not ready yet," Brooks said.

LaSalle County Sheriff Tom Templeton said the tornado had all but destroyed the LaSalle County Nursing Home and the county's Highway Department building, which lay just west of Naplate.

There were no major injuries to residents or workers, he said.

"The staff did a marvelous job of moving people out of rooms (as the tornado hit)," Templeton said. "Windows were blown out. The roof was extremely damaged. The front doors were sucked right out of the building and crushed.

"I couldn't have asked more from the staff. Some of those (residents) were scared. Some were kind of oblivious to everything that's going on and were hard to control, because they wanted to just walk everywhere. The staff was just calm. Sirens going off, fire alarms going off, but it wasn't chaotic."