A Naperville North High School student, Samia Abdul-Qadir, will be U.S. Rep. Bill Foster's guest Feb. 28 during a joint session of Congress in Washington, D.C.Abdul-Qadir was a participant in the Naperville Democrat's recent community discussion at the... 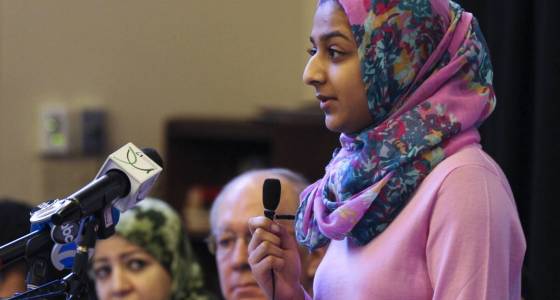 Abdul-Qadir was a participant in the Naperville Democrat's recent community discussion at the Islamic Center of Naperville on the impact of President Trump's attempts to ban travel from several Muslim-majority countries.

"Our country thrives on the innovation, culture and diversity that immigrants from all walks of life bring to the United States. No one should have to live in fear that these opportunities will be taken from them," Foster said in a written statement.

History has not looked kindly on us when we've prevented people fleeing violence from seeking refuge in this country," he said. "Samia's courage and conviction have stood out as a bright spot amid an atmosphere of fear and hate."

"I've always been taught that America's strength comes from the spirit of inclusion and diversity," Abdul-Qadir said in a statement. "I don't think it makes America any safer to single out a group of people because of their religious beliefs. It goes against this country's core values."