My boob job ruined my life

The Barbie boob job was one of the top beauty trends of the 00’s.But it has rapidly fallen out of fashion, with many women now regretting their surgery.According to the British Association of Aesthetic Plastic Surgeons, breast implant procedures fell... 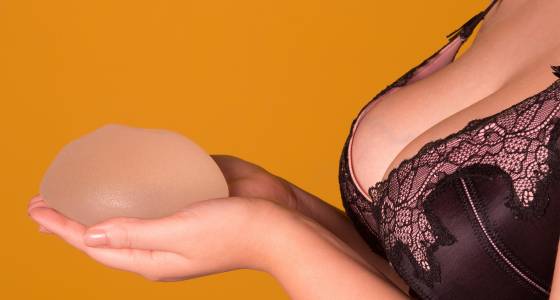 The Barbie boob job was one of the top beauty trends of the 00’s.

But it has rapidly fallen out of fashion, with many women now regretting their surgery.

Here, readers reveal how they boobed – with cautionary tales about implants either bursting or going hard, and boobs getting too big and attracting unwanted attention.

Lisa who lives with her partner, hairdresser Dean Forster, 36, says: “I’ve never liked my big breasts. I was a 30F by the time I was 15 and they soon started heading south.

“In 2006 I was diagnosed with a brain tumor and I decided to write a bucket list. At the very top was a breast reduction but the surgeon said they would look better with an uplift and implants to make them look rounder.

“Everyone said they looked great afterwards but I hated them. At 5 ft 6 in and a size 10, my boobs were bigger than my head.

“I looked fat and getting clothes that fitted me was a nightmare.

“They made me lack confidence and with the tumor affecting my balance, speech, hearing and vision, I thought I’d never find love.

“But I met Dean on a blind date two-and-a-half years ago and we now have a ten-month-old, Ruby.

“I hate the filthy looks women give me if I wear tight tops and men just talk to my breasts, which weigh at least a stone each.

“They are so big they put pressure on my back and neck. My bras are enormous and the straps leave deep marks on my shoulders.

“The NHS has refused to let me have a reduction and I can’t afford it. Like Victoria Beckham, I wish I had never messed with my breasts.”

Office worker Janey Byrne had implants in 2004 after her husband David, 48, sold his car to pay for them. Medical woes outweighed the benefits, however.

Janey, from Laughterton, United Kingdom, who first went from 36AA to a B, says: “I was 35 when David told me I should have breast implants because I “looked like a man.”

“I always knew my figure was boyish but I was shocked.

“Afterwards, I felt great. My new boobs made me more confident so I wore low-cut tops and showed off my skin. But eight years later, the PIP scandal broke and I found out I had toxic implants.

When I went to have them replaced with safer implants, my surgeon encouraged me to have a breast lift as well. I agreed and forked out $4,764.

But my bust size went from a B to a 36E. I didn’t realize they would be so large. I felt as if my skin was taut and the implants felt hard.

David, a fire crew manager, says: “I probably did say Janey looked mannish but can’t remember that far back. I love her and she wanted to have the procedure done so I sold my car to support her.

“I want her to get the implants taken out now. Janey never wanted them to be so large and they’ve caused her health problems.”

In 2004, caterer Sarah Louise Browne from Cheltenham, United Kingdom, had implants to go from 34D to a 36G.

They were so big she could no longer exercise and piled on the weight.

Sarah had the implants removed on the National Health Service last year. She says: “I paid $5,300 for my implants as I had dreams of making it as a glamour model. I also aspired to be like my heroes Madonna and Pamela Anderson.

“But as soon as I had them done, I had excruciating pain in my back and neck. The implants were heavy and uncomfortable. I was less active and gained 56 pounds in weight in two years.

“I have always had a bubbly, fun personality but men started liking me just for my boobs, and women started to see me as a threat and tended to keep me away from their partners.

“Last year, I finally had the implants removed on the NHS because they were causing me so much pain. The operation took 45 minutes and luckily my chest is still perky.

“I wish I’d had it done years ago.

“I do sympathize with Victoria Beckham. She was in the public eye and the pressure of fame probably drove her to have implants.

“So many women had implants to feel more glamorous – like me – but I regret it.

“We were silly and should have embraced our natural beauty. I’m a natural 36F now and feel like I have got my mojo back.”

Hairdresser Emma Wilkinson went from a 34A to a 34E four years after her daughter Chloe, now 15, was born.

But the mom of one, from Fulham, admits she was too young and naive.

“After surgery, you are advised to wear maternity bras but I was so excited about having my new boobs, I wanted to show them off in nice bras.

“I also smoked. I had been advised both these things could cause the scar tissue to harden and the implants to look deformed but I was naive.

“I became too embarrassed to show them to anyone and I only had sex with my bra on. I couldn’t take my daughter swimming and I had to take time off work with depression.

“After four years I was referred for a second operation to correct them. The surgeon had to remove a lot of tissue so they were a lot smaller.

“But then my right breast swelled up to twice the size and I had to go to hospital for it to be drained.

“I really don’t like my boobs these days. I always wear a bra and squash them together, otherwise they don’t look natural.

“I wouldn’t do it if I had that time again. My self-esteem is lower now than it was when I was 21.”

Victoria Beckham had implants that reportedly took her from a 34A to a 34DD in 1999 after the birth of son Brooklyn.

She initially denied having had a boob job until finally admitting the truth in 2011, by which time the implants had been removed.

Last year, she wrote in Vogue magazine: “Don’t mess with your boobs. Just celebrate what you’ve got.”

And of her long refusal to admit that she had implants, she said: “All those years I denied it – stupid. A sign of insecurity.”

Baywatch actress Pamela Anderson, 49, was the original plastic princess but last year she told W Magazine it is one of the things she regrets doing for beauty.

Reality TV star Kourtney Kardashian, 37, recently said she is sorry that she had implants when she was 21 as she had “great boobs” to begin with.

Playboy model Carmen Electra, 44, had surgery in the late Nineties, taking her from a 32B to a DD after she was assured it would improve her life and career.

She later admitted: “I didn’t want to go as big as that. I could have left myself alone – I think I was fine the way I was.

“I had nice breasts before, though they were small.”