A free, web-based curriculum of classes designed by an Elgin librarian to help patrons learn about technology is being used by fellow librarians as far as Europe.Monica Dombrowski, director of digital services at Gail Borden Public Library, developed "Gail's... 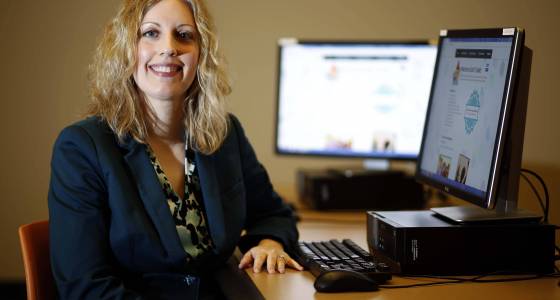 A free, web-based curriculum of classes designed by an Elgin librarian to help patrons learn about technology is being used by fellow librarians as far as Europe.

There are 65 classes divided into seven tracks -- basics, Google tools, Microsoft tools, software and applications, job and career, social media and tablets -- downloadable by anyone, not just librarians.

Each class includes a guide, an activity sheet and a handout, and some have PowerPoint presentations and practice files.

There's a real need for libraries to teach digital skills and literacy, but many don't have the resources to train their staff members or develop their own classes, Dombrowski said.

"The thinking was, 'What if we were you? What would we need to help our community?'" said Dombrowski, 44, who was named by Library Journal among 52 outstanding "movers and shakers" librarians last month. "It was labor-intensive on the front end, but we knew it could be built."

Librarians throughout Illinois and in Florida, New Hampshire and Pennsylvania use Gail's Toolkit, whose site got more than 25,000 page views and 4,200 site visitors after its launch Sept. 30, 2015, through the end of 2016.

Nina Yankova, who works at a regional library in Yambol, Bulgaria, said it's proven very useful in her everyday work.

"In Bulgaria we don't have such resources," she said. "I think it has significant impact on my work with seniors. Very useful and well-made materials which can be easily adapted to your current needs."

Jennifer Winter, adult services librarian at West Chicago Public Library, agreed. "We've used it a lot and continue to use it. It's very helpful," she said. "I think it works great. It's a very good foundation, and we can just sort of tweak it for things that might work better with our patrons."

Sherrie Rhodes, director of Prairie Creek Public Library in Dwight, Illinois, said she plans to use Gail's Toolkit to teach classes about Pinterest, Craigslist and more.

"We have some older patrons that (sometimes) don't understand the social media," she said. "The templates I have seen through that (Gail's Toolkit) do a really god job of explaining everything and breaking it down to where it's easier to understand."

Dombrowski, an Elgin resident, was a training manager for a library automation software firm until she was laid off due to downsizing in 2011.

She'd considered a library career after earning a master's degree in library and information science in 2008, but she was leery of a hefty pay cut, she said. Losing her job gave her the impetus to make the leap.

She was a librarian at Westwood College in Woodridge before being hired by Gail Borden as technology education manager in 2014, which she called her "dream job."

The grant ran out recently, but the Public Library Assocation might step in and host Gail's Toolkit via its online digital learning portal. "It's a great resource we could bring attention to," association Deputy Director Scott Allen said, "so we're trying to figure how to make this available to people."