Welcome to Clout Street: Morning Spin, our weekday feature to catch you up with what's going on in government and politics from Chicago to Springfield. Subscribe here.Topspin Democratic Sens. Dick Durbin and Tammy Duckworth are questioning the Rauner administration’s... 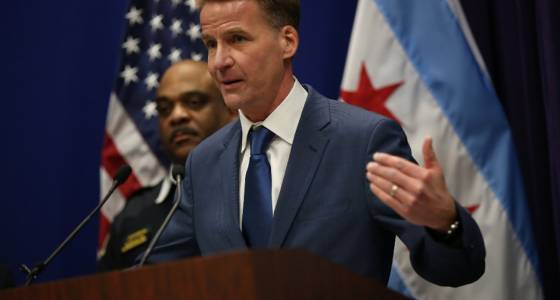 In a letter to Shimkus sent Tuesday, the senators called on Shimkus to “honor the decades-long tradition of bipartisanship in the selection of U.S. attorneys, U.S. marshals and federal district court judges in Illinois.”

“Rep. Shimkus has delayed re-establishing this bipartisan process in order to consult with the Trump Administration — a process that is more urgently needed since last Friday when Attorney General Jeff Sessions fired all sitting U.S. attorneys, including the U.S. Attorney for the Northern District of Illinois, Zach Fardon,” the letter said. “By longstanding Senate practice, both U.S. senators in a state must give their consent, on a form called a blue slip, before federal nominees in that state will be considered by the (Senate) Judiciary Committee.”

But the senators also questioned the involvement of Kathy Lydon -- who heads the state’s Washington, D.C., office and is a former chief of staff for former U.S. Rep. Judy Biggert of Hinsdale -- in earlier talks about the process.

“We also note that you invited a representative of Governor Rauner to participate in our January 17 conversation. Although she is very familiar with this issue because of her previous service in the office of U.S. Congresswoman Judy Biggert, we believe her new position representing Gov. Rauner raises serious issues about her continued participation,” the senators wrote.

Shimkus spokesman Jordan Haverly said the congressman wants the choices to be “a bipartisan collaborative process.”

Asked about the Rauner administration’s involvement given the recent history of Illinois governors and the U.S. attorney’s office, Haverly said, “Then should Sen. Duckworth be involved in the process, having worked with Rod Blagojevich?”

Shimkus is going to “listen to elected officials and leaders in the state” and “wants to make the best recommendation he can to the president for someone who will root out corruption and stop the violence in Chicago,” Haverly said.

“Ultimately only one person makes the appointment and that’s the president,” he said. (Rick Pearson)

*The Illinois House and Senate meet.

*Cook County State's Attorney Kim Foxx is scheduled to give a lunchtime talk to the City Club of Chicago.

Gov. Bruce Rauner's administration Tuesday scored a victory in its push to limit overtime pay for home health care workers while disability advocates said the changes will harm clients who rely on that care.

The administration's rules would prevent workers who provide home services to people with disabilities from clocking more than 45 hours per week. In addition, people enrolled in the program would have to hire backup providers. The rules cleared a committee via a tie vote.

“The main point of the program is to keep people in the community, and if you just rely on one person, sooner or later, you put yourself at risk of having to go to an institution if that person becomes unavailable,” Flather said.

The new rules came in response to a change in federal policy that says home workers must be paid time and a half when they work overtime. Flather said these changes will save the state money and create jobs. He also said the administration is focused primarily on “customer security and safety.”

However, Democrats and disability advocates flooded Tuesday's hearing to tell lawmakers the rules are too vague and not legal.

They said the changes will hurt people with disabilities, contending they would force people to work with caregivers they aren’t comfortable with. They also reject assertions that the changes are designed to benefit workers.

“The administration never cared about how tired providers were until they were required to pay them time and a half for their overtime hours,” said Terri Harkin, vice president of the home care division at SEIU Healthcare Illinois, the union that represents home health care workers. Advocates said they will consider how to keep fighting the new rules.

*Groups push back against shoplifting plan: An alliance among retailers, law enforcement and municipalities emerged Tuesday as they spoke out against a proposal that would raise how much a person can shoplift before it’s considered a felony in Illinois.

Legislation before the General Assembly would increase the felony threshold for retail theft from $300 to $2,000. Another bill would hike it to $2,500. The proposals stem from Gov. Rauner’s commission on criminal justice reform, which aims to reduce the state’s prison population.

Greg Sullivan, executive director of the Illinois Sheriffs' Association, said he understands efforts to keep low-level offenders out of jail, but he said the proposed changes could lead to a spike in shoplifting – something that in turn would cost money in the form of increased law enforcement needs.

“It should be making people responsible for their actions rather than considering what the cost is, the social cost, of putting somebody in jail,” Sullivan said. (Haley BeMiller)

*Feds: CPS consultant made millions through 'corrupt process from beginning to end.'

*Chicago set to roll out Airbnb rules after months of delay.

*'Butter is still a fat and still has lots of calories,' dietitian says in story about the spread being cool again.

*Read Pritzker's filing to set up a campaign committee here.

*The Trump administration works to salvage support for the Republican health care proposal.