CLEVELAND -- When Americans went to the polls last November and elected Donald Trump, a significant number of them did so because, no matter what misgivings they might have harbored about his fitness to be president, they wanted him to be the one to nominate... 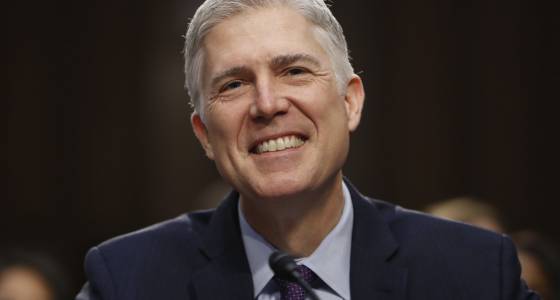 CLEVELAND -- When Americans went to the polls last November and elected Donald Trump, a significant number of them did so because, no matter what misgivings they might have harbored about his fitness to be president, they wanted him to be the one to nominate a successor to the late Antonin Scalia on the Supreme Court.

Or, perhaps more accurately, they did not want the choice left in the hands of Hillary Clinton. As president, she most assuredly would have added a fifth vote to the Court's left-wing cabal that renders its judgments based on the way its members think things ought to be, rather than by considering the Constitution and how the laws enacted by the legislative branch are written.

Even those of us who did not support Trump found succor in the expectation that any Trump nominee would help preserve the constitutional rule of law, at least for now.

With the nomination, ongoing hearings and inevitable confirmation of Neil Gorsuch, the time is at hand.

It is not the slam dunk that it ought to be for a jurist of Gorsuch's background and experience. The Democrats and their liberal allies are still smarting over the treatment of Barack Obama's spurned nominee Merrick Garland, and have vowed to make the process as disagreeable as they can.

Disagreeable or not, however, confirmation is going to happen.

And rather than chafe over the unseemly treatment of the ultra-qualified Gorsuch, might I suggest we turn our attention to the arguments being marshaled by the anti-Gorsuch forces. It will be an excellent way to solidify our understanding of the contempt they have for the constitutional role of the judiciary.

To use the most egregious (but far from the only) example, consider if you will the questions from comedian Al Franken of Minnesota, whose presence on the Senate Judiciary Committee is nothing short of an embarrassment for the country. Franken used his time onstage not to delve into judicial philosophy or the role or the court, but to pepper Gorsuch with questions about his personal opinions - on politics, on abortion, on whether he agreed or disagreed with other court decisions that Gorsuch might someday be called upon to consider as a justice.

The judge had to keep reminding Franken that personal value judgments take a back seat to the law ... a concept that was clearly foreign to the former entertainer.

The use by Franken and others of Gorsuch's dissenting opinion in the now-famous "frozen trucker case," as a way to paint the judge as unsympathetic to the common folk, is revealing.

In January 2009, a trucker named Alphonse Maddin was driving through subzero weather in Illinois when he couldn't find his approved refueling station and pulled off the road. The brakes on his rig froze as a result, and he was told to stay with the truck until help arrived. After waiting three hours in an unheated cab, he unhooked his trailer and drove to a gas station. The repair crew arrived 15 minutes later, and Maddin ended up being fired for abandoning his cargo.

Maddin filed a complaint with the Occupational Safety and Health Administration, which is an arm of the U.S. Department of Labor. His complaint was dismissed, but he appealed up the chain in the DOL, where ultimately an administrative law judge determined that he was protected under a safe-driving-related whistleblower statute (because he had reported the frozen brake line) and therefore had been dismissed illegally.

When the case reached the three-judge panel for the 10th U.S. Circuit Court of Appeals, two judges agreed with the whistleblower angle. Gorsuch dissented.

A reading of the decision -- and particularly of Gorsuch's dissent -- is instructive.  His writing was simple, direct and elegant -- reminiscent of Justice Scalia's style, actually -- in delineating the judges' major responsibility, which is to determine what the law says and whether it was followed.

"It might be fair to ask whether [the trucking company's] decision was a wise or kind one," Gorsuch wrote. "But it's not our job to answer questions like that. Our only task is to decide whether the decision [to fire Maddin] was an illegal one."

He went on: "... there is simply no law anyone has pointed us to giving employees the right to operate their vehicles in ways their employers forbid. Maybe the [DOL] would like such a law, maybe someday Congress will adorn our federal statute books with such a law. But it isn't there yet. And it isn't our job to write one - or to allow the [DOL] to write one in Congress's place."

That is the crux of the matter, both in this case and in what we might expect from Justice Gorsuch.

Maddin was a sympathetic character, but it doesn't matter what Gorsuch thought of Maddin's plight. Just as it didn't matter what Scalia thought of people who burn the flag when he strongly wrote that flag-burning is protected free expression under the First Amendment. It only matters what the Constitution and the law say.

It is not the judges' job to create new laws when they do not like the existing ones. That's the job of the legislative branch of government.

Happily, in Neil Gorsuch, we will be getting a Supreme Court justice who understands the difference.

Ted Diadiun is a member of the editorial board of cleveland.com and The Plain Dealer.