TOKYO—A Canadian pastor serving a life sentence in North Korea has been allowed to meet with the Swedish ambassador in Pyongyang and telephone his family.Swedish Ambassador Torkel Stiernlof says he met Hyeon Soo Lim for 40 minutes last week. He said... 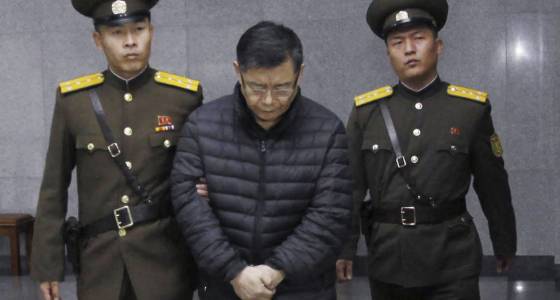 TOKYO—A Canadian pastor serving a life sentence in North Korea has been allowed to meet with the Swedish ambassador in Pyongyang and telephone his family.

The ambassador said in an email to The Associated Press on Wednesday that he and Lim “weren’t rushed.”

He said there were two North Korean officials in civilian clothes and an official photographer present throughout the meeting, which was held in a conference room at a Pyongyang hotel.

“He was escorted in and out of the room without handcuffs by uniformed guards,” Stiernlof said. “We discussed his health and other things, of course, but I refrain from commenting on these matters.”

He added that Lim spoke over the phone with his family last Friday.

It was unclear why the meeting was arranged at this time.

North Korea claims such meetings are granted for humanitarian reasons, but Pyongyang has been accused of using foreign detainees as a way to win political concessions or high-level visits from other countries.

Lim, a South Korean-born Canadian citizen in his 60s, was convicted and sentenced in 2015 on charges of trying to use religion to destroy the North Korean system and helping U.S. and South Korean authorities lure and abduct North Korean citizens.

At least two other foreigners are currently detained in North Korea.

Last year, American Otto Warmbier, then a 21-year-old University of Virginia student from suburban Cincinnati, was sentenced to 15 years of hard labour in prison after he confessed to trying to steal a propaganda banner. Kim Dong Chul, who was born in South Korea but is also believed to have U.S. citizenship, is serving a sentence of 10 years for espionage.

It is not clear under what conditions Lim and the others are being held.

Foreign prisoners are usually held in special detention centres that are separate from North Korean prisons.

The Swedish embassy in Pyongyang looks after consular affairs for Canada in North Korea because the two countries do not have diplomatic relations.