Galleries Videos CONTACT ADVERTISE
Girne 14°
scattered clouds
BUSINESS EDUCATION ENTERTAINMENT HEALTH POLITICS SCIENCE SPORTS TECHNOLOGY
08:11 Stick it to “The Man” at the Zero Trust Security Summit
04:37 What to Consider When Starting Your Own Business
10:17 Clover POS System for Dental Offices
06:14 How Mobile Technology is Revolutionizing the World of Poker
20:31 The Importance of Banks in Our Lives
05:46 Things to Consider When Hiring a Criminal Defense Lawyer
09:15 Couple T-shirts are ideal for spicing up relationships
09:01 Laser Tattoo Removal and Its Amazing Benefits
07:58 Consolidate your medical bills with a debt consolidation
19:48 Is your mind a certain people? Elina Tanskanen gives a task, which you...
BIST
122540
GOLD
298.453
USD
5.9321
GPB
7.7905
EUR
6.5570
Breaking News
Why Go for Physical Therapy and How to Find the Best Therapist
Close

HOUSTON (AP) — Police in Texas could soon find it easier to report officer-involved shootings to the state — but they also may pay a price for failing to do so.Texas is one of seven states that require law enforcement agencies to provide information... 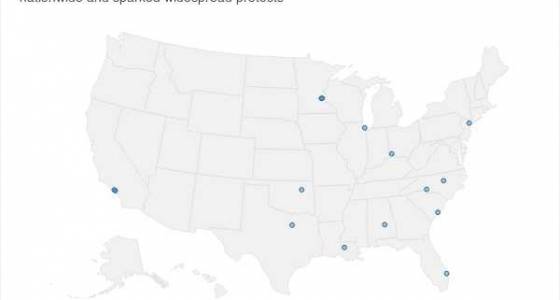 HOUSTON (AP) — Police in Texas could soon find it easier to report officer-involved shootings to the state — but they also may pay a price for failing to do so.

Texas is one of seven states that require law enforcement agencies to provide information about officer-involved shootings to the state, and it could become the first to mete out punishment to those that don't.

State Rep. Eric Johnson says he's is pushing to "put some teeth" into Texas' statute after learning that up to a dozen fatal shootings hadn't been reported since the law went into effect in 2015. He's also trying to create a web portal that would make it easier for law enforcement to report crime data, including officer-involved shootings.

Texas' law, which was sponsored by Johnson, requires agencies to provide information about the shootings in a one-page report emailed to the state attorney general's office within 30 days, but there are no enforcement or tracking mechanisms.

"For the most part, departments are doing a pretty good job. ... Voluntary compliance is just not quite getting us to 100 percent," said Johnson, a Democrat from Dallas who has proposed withholding some state money for agencies that don't comply.

Supporters of such reporting laws say they can help authorities and the public understand how often and why officers use deadly force. But legal experts and researchers say a lack of consequences for failing to report or a mechanism for tracking missing reports can lead to incomplete information and a lack of accountability.

"We've been pushing this (reporting of police shootings) for several decades. ... But no one's really stepped up except a few states and the states that have I think are mostly like Texas ... without any kind of teeth in the requirement," said Geoffrey Alpert, a professor of criminology at the University of South Carolina and an expert on police use of force.

Under Texas' law, once law enforcement agencies report an officer-involved shooting, the attorney general's office then has five days to post the report related to each shooting online.

One bill introduced by Johnson this legislative session would make it so that any Texas law enforcement agency that fails to submit a report on a shooting is ineligible to receive criminal justice grant money from the governor's office for a year. In 2015 and 2016, the governor's office provided more than $52 million in grants for such things as body-worn cameras, anti-gang centers and training.

"We recognize the collection of data is probably in most cases helpful to law enforcement not hurtful," said Kevin Lawrence, the group's executive director.

Attention was drawn to unreported fatal shootings after freelance journalist Eva Ruth Moravec reported about them as part of "Point of Impact," a yearlong series on police shootings. Since then, 10 of the missing reports have been filed, according to an Associated Press review, and the attorney general's office says it's looking into the other two shootings.

Both Johnson and Lawrence said they don't believe any law enforcement agency intentionally failed to report a shooting, but some agencies might have been unaware of the requirement.

A second bill by Johnson would create a website where agencies could submit required information. Agencies currently email their reports to the attorney general's office and that office posts them on its website as PDFs. Johnson says they're not user-friendly and are not part of a searchable database. His proposed website could generate reports that could be accessed by the public.

Other states with laws requiring law enforcement agencies to report officer-involved shootings or use of deadly force incidents are California, Colorado, Maryland, Minnesota, North Carolina and Oregon. In Connecticut and Maine, state authorities investigate any cases in which an officer uses deadly force, with the final reports available online.

But the states don't have a way to track whether shootings are being reported.

"We don't have any sort of audit function built into our system. We trust that the agencies are reporting to us what accurately happened in their jurisdiction," said Ashley Cox, uniform crime reporting manager with the North Carolina State Bureau of Investigation.

Johnson praised efforts by the media and the public to track down missing cases but the responsibility can't fall solely on them and "it's something we're going to have to address in the legislation."