Mild weather returns to N.J. in final days of February

Although Sunday's temperatures were normal for late February, they appear to be a bit of an aberration as the month draws to a close. Rain is possible on both Tuesday and Wednesday in New Jersey, according to AccuWeather.com.AccuWeather.com  Following... 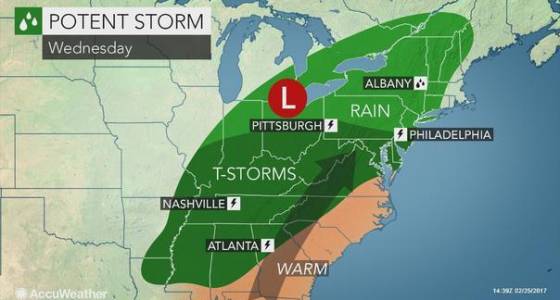 Although Sunday's temperatures were normal for late February, they appear to be a bit of an aberration as the month draws to a close.

Following several days of unseasonably mild weather last week, more above average temperatures return on what should be a dry Monday.

It's a chilly start to the day, but by afternoon the mercury will climb into the low to mid 50s in most spots -- roughly 10 degrees above normal for Feb. 27.

As of 6:40 a.m. temperatures range form the high teens in Walpack to the low 40s in Downe Township, though most spots are in the upper 20s.

Trenton is expected to make it to 56 later, with Newark reaching 54 and Atlantic City topping out at 49.

It'll be a cloudy overnight with lows falling to the upper 30s and low 40s.

Early spring not good news for all

Forecasters say there's about a 40 percent chance of rain on Tuesday, the final day of the month. Temperatures should again be very mild -- in the upper 50s and low 60s.

March begins Wednesday with extremely warm conditions and the possibility of more rain. Highs might reach the low 70s and there's a threat of thunderstorms.