Meet the Baltimore across the Atlantic, a jewel of Ireland

There are tip-offs, hon, that you're not in Charm City despite the echoed name.Forget our brassy Queen of the Patapsco on this side of the Atlantic. Celtic Baltimore instead is a still-functioning five-trawler fishing village of 340 permanent residents —... 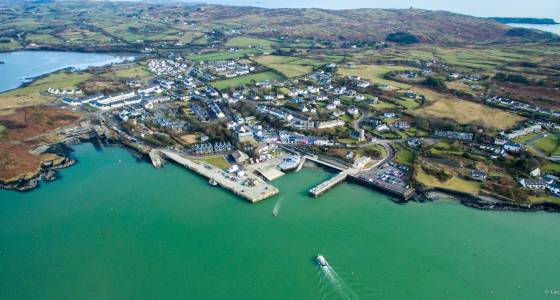 There are tip-offs, hon, that you're not in Charm City despite the echoed name.

Forget our brassy Queen of the Patapsco on this side of the Atlantic. Celtic Baltimore instead is a still-functioning five-trawler fishing village of 340 permanent residents — about a Saturday night's crowd at Bertha's Mussels — clinging to the spiny southwest corner of Ireland facing Spain.

They make a good living from tourists, though, with about 100,000 visitors annually, most of them Irish. Small potatoes stacked against the 71,000 who show up for a single Ravens game at M&T Bank Stadium.

And they talk funny. It's Balty-More here, not Balmer, or Balta-More.

But that's OK; those are our treasures.

The lure here is simple. It's hard not to be thrilled by the jagged coastal cliffs rising sharply from ever-changing Atlantic sea blues and greens and slate grays. A narrow channel leading into Baltimore Harbor and the village dock draws you closer.

The land climbs from the water's edge voluptuously to sheep-dotted fields draping the flat lands. The presentation that unfolds is a tangle of forests and fields framing thatched cottages, a ruined abbey and a few castles tucked in the green.

On sunny days, the crystal-clear waters sparkle, and as many as 400 sailboats tie up in summer anchorage. When it rains — sometimes two or three times a day any time of year — the sailors stay in harbor, with pubs and restaurants giving solace — a true Charm City response.

I stumbled on Celtic Baltimore by chance — that name! who from Maryland could resist? And after a week of exploring, fell hard for it. There are miles of trails to walk, from easy-going farm paths to spooky little ruts leading to ruins of a Spanish castle and village outpost on top of the cliffs.

There's a robust nautical industry, with rentals and schools offering the best in sailing — from sailboards to yacht rentals — kayaking, snorkeling, swimming, fresh and salt water fishing, and whale and bird watching. A strong scuba community offers lessons and rentals, and organizes explorations of the Nazi submarine U-260 and what they bill as the largest ship wreck in the world, the Kowloon Bridge, in about 100 feet of water a few miles off shore.

An aerial shot of Baltimore Harbour in Ireland.

An aerial shot of Baltimore Harbour in Ireland.

Still, one wonders how it is that the two Baltimores don't acknowledge each other. Maybe it's that Lord Baltimore, for whom Charm City was named in 1729, never set foot in the village — his real name was Calvert, and he took the title of Baltimore because he liked the sound of it.

Yet connections are real. Frederick Douglass stopped by the dock here in 1845, after fleeing slavery. No record of Douglass' thoughts about the village and its curious connection to his slave past exist, but Douglass would write home that in Ireland:

"I find myself regarded and treated at every turn with the kindness and deference paid to white people. When I go to church, I am met by no upturned nose and scornful lip to tell me, 'We don't allow n——-s in here!'"

While Douglass' visit goes unnoticed, a few of the tourist gift shops circle back to Charm City in an unusual way — local artists do oils and acrylic renderings of a familiar-looking schooner. Some of the bars and restaurants hang such images in places of honor.

It's the Pride of Baltimore, the Charm City ship that first docked here on its maiden crossing in 1985.

"The entire village was so hospitable," remembers Jan C. Miles, a sailor on the ship and today captain of its second iteration, Pride of Baltimore 2.

With its cannons blasting and sails and flags unfurled, the Pride of Baltimore II returned to port Thursday after a four-month, 8,000-mile voyage — during which the crew welcomed thousands of visitors aboard and won a series of races in the Great Lakes.

With its cannons blasting and sails and flags unfurled, the Pride of Baltimore II returned to port Thursday after a four-month, 8,000-mile voyage — during which the crew welcomed thousands of visitors aboard and won a series of races in the Great Lakes.

"We spent two weeks in harbor," he said later in a telephone interview. "About 10 hours a day repairing the ship — a wooden ship takes a beating crossing the Atlantic — and another 10 hours at night with our new friends."

"After a while, both the crew and our Baltimore friends were exhausted from the pleasure of it all," he said, adding that life-long friendships were made during that first visit, and whenever the Pride crosses the Atlantic, it makes a call at its name-sake Celtic home.

Miles recommends visitors take time to walk around Baltimore, good advice if my experience holds true. Perhaps the best way to prepare — and fill in some of that rainy day time — is do a little reading first. Otherwise, there are no guided tours.

"The Stolen Village: Baltimore and the Barbary Pirates," by Dublin journalist Des Ekin, is a quick-paced paperback, with maps, about the raid of Monday June 20, 1631, when pirates attacked at night and kidnapped 50 teenagers and children, 34 adult women, and 23 men to sell into slavery in Algiers. Fear of that attack led to abandonment of the village until the 1800s.

"Baltimore Castle: An 800-Year History," and "Pirates of Baltimore," are paperbacks by local historian Bernie McCarthy focusing on Dún na Séad, a castle at the dock dating at least to the 11th century, and possibly to much earlier.

With the maps and narratives in hand — the books are pocket-size — the static beauty of Celtic Baltimore blossoms from scenery to history and the big things that move through time.

From the beaches of Ocean City in the east to the Appalachian Mountains in the west, from the rolling hills of My Lady's Manor (home to Maryland's steeplechase races) in the north to the tidewater marshlands of the Chesapeake Bay to the south -- Maryland has a little bit of everything.

My favorite walk is to start at the cliffs by the channel where a white-washed 55-foot brick beacon stands to mark the entrance. The drop is a straight 300 feet to the channel below, where the pirates entered so long ago. Legend has it that Phoenician traders came through to swap Egyptian scarabs and Greek wine for Irish butter and hides.

It's about a three-mile downhill walk to the only road in town, a curly thing leading to the dock. You pass by The Cove, with only a two-person bench marking where the pirates stashed their long boats.

The docks and village center rise ahead. There are outdoor cafes under the shadow of Dún na Séad, and it's a good place to eye the harbor and pause for a beer, and maybe something from the abundant fresh-caught seafood here.

Alas, no Beautiful Swimmers are in the house, so I order Brown Crab, an Atlantic beast weighing six pounds, whose delicate flesh comes tangled like spaghetti squash. That's when the Charm City connection hits hard.

There is no Old Bay or Wye Island Seasoning for this crab.

Lane is a writer in Silver Spring.

Baltimore is 240 miles southwest of Dublin over narrow and challenging roadways.

Family-run, homey and unpretentious, the 14-room hotel is a short walk from central Baltimore, with five nearby one-bedroom apartments with mini-kitchens, and six townhouse suites for rent. Doubles start at 75 euros nightly, with full hot breakfast in the hotel dining room.

The 13-room hotel overlooks the harbor and dock, within steps of pubs, restaurants, and Dún na Séad. Doubles start at about 50 euros per person, with full hot breakfast.

A three-room B&B starting at 80 euros for two nightly, right at water's edge where the pirates raided Baltimore in 1631.

A throw-back gem from seafaring days, with sailors and local fishermen and women trooping in from the harbor below for showers reserved just for them out back. House-made bar food — try the full crab platter, 11 euros, loaded with brown crab, salad and brown bread.

An old pub tricked out with mariner artifacts and hokey bobble-head images of pirates, a snug beer garden out back in the nice weather and a lively weekend tradition of music. Try the fish and chips, with salad and fries, 10 euros, and a little bowl of seafood chowder, 5 euros.

Prepared sandwiches, fresh fruit, vegetables, chips and soft drinks — try the ham and cheese sandwich, 2.50 euros, Cotter's sells a little of everything — maps, wine, books, newspapers — and has the only ATM in a village with no bank.

Cotter's and some B&Bs have maps