Maryland snow: 'It's going to be a mess,' meteorologist says

Six to eight inches of snow are forecast to fall Monday evening and overnight in the immediate Baltimore area, and northern Baltimore County could see as much as a foot, according to the National Weather Service.The snow system — expected to sweep quickly... 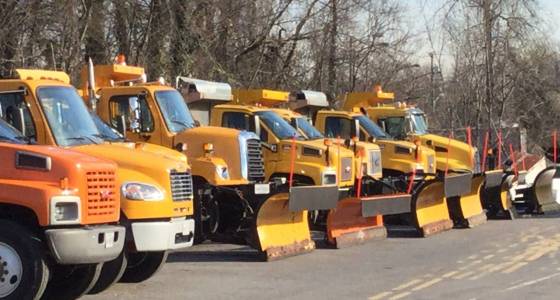 Six to eight inches of snow are forecast to fall Monday evening and overnight in the immediate Baltimore area, and northern Baltimore County could see as much as a foot, according to the National Weather Service.

The snow system — expected to sweep quickly into the city about 5 or 6 p.m. — is moving up the East Coast from the southwest, the weather service said. Warmer atmospheric air above the Interstate 95 corridor in Southern Maryland could lead to some rain and sleet mixed in, lowering snowfall totals there slightly but causing chaotic road conditions nonetheless.

"When you consider the millions of people and travelers, it's going to be a mess," National Weather Service meteorologist Kevin Witt said. "We're looking at a couple inches of snow, no two ways about it."

"I don't think anyone will be going anywhere on Tuesday," he said. "We'll go from green grass and budding little trees to our winter nightmareland in a matter of hours."

Forty to 50 contractors with the State Highway Administration were working all day Sunday, and planned to work all day Monday, treating the area's interstates with a salt brine solution to keep ice from forming on the pavement, spokesman Charlie Gischlar said.

Forecasters are calling for six to 10 inches of snow in the immediate Baltimore area — with more expected in the northern suburbs — Monday night through midday Tuesday.

That prediction, as of 8 a.m. Monday, is a slight downgrade in potential from earlier forecasts of up to a foot. Meteorologists...

Forecasters are calling for six to 10 inches of snow in the immediate Baltimore area — with more expected in the northern suburbs — Monday night through midday Tuesday.

That prediction, as of 8 a.m. Monday, is a slight downgrade in potential from earlier forecasts of up to a foot. Meteorologists...

Due to the negligible snowfall so far this year, the state's salt stashes have hardly been touched. About 380,000 pounds of salt and one million gallons of salt brine are available for use, Gischlar said.

Maryland state troopers in several units that are not normally assigned to road patrol were put on storm duty Monday to aid other agencies in their snow response, State Police said. Those units include the Commercial Vehicle Enforcement Division, the Automotive Safety Enforcement Division and the Special Operations Division, the agency said. Troopers from the Criminal Investigation Bureau are on standby but are not expected to be needed.

A look back at the winters — since 1891 — in which Baltimore got the least amount of snow.

In the city, officials waited for the Monday morning rush to subside before treating the roads for the snow, which was expected to begin falling around the evening rush and potentially continue until as late as 3 p.m. Tuesday. The city transportation department planned to activate its snow emergency operations center and call 180 pieces of heavy equipment into service sometime Monday evening, spokeswoman Adrienne Barnes said.

The stadium parking lots at Oriole Park at Camden Yards and M&T Bank Stadium, which were used for snow dumping after the whopping 29.2-inch storm last year, were not expected to be needed this year, Stadium Authority spokesman Michael Frenz said. The stadium authority has an agreement with the city to allow people to park in the lots if snow emergency routes are activated, he said.

Officials asked commuters to leave work early Monday and avoid driving Tuesday morning, if possible, both for safety purposes and to give snow-removal crews ample room to do their jobs. If you are driving in the snow, don't attempt to pass a slow-moving plow — the roads behind the vehicles are safer than the ones in front of them, Gischlar said.

"We think this is mostly going to be a night storm," he said. "Make smart decisions when traveling Tuesday morning."

Barnes asked drivers to monitor the latest weather reports and use "extreme caution" in deciding whether to drive.

"Plan your commute wisely," she said. "If you don't have to go out tomorrow, you might want to stay indoors."