The shooting spree - at least 21 rounds fired in different parking lots - had left three dead, three injured, and prompted a massive police manhunt just north of Washington.It was noon on a Friday in May last year, and the suspect, Eulalio "Leo"... 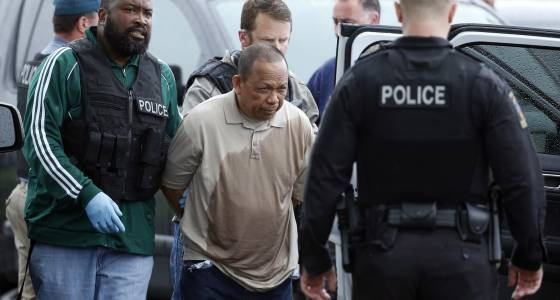 It was noon on a Friday in May last year, and the suspect, Eulalio "Leo" Tordil, then 62 and a career law enforcement officer, had been sought by police for 20 hours. In his rented Hyundai Elantra, Tordil allegedly had a Glock .40-caliber handgun, clothes, $1,802 in cash and a journal with incriminating entries.

Hoping to duck out of sight, Tordil slipped into a Boston Market, according to police. But a short time later, he was under arrest.

A plea agreement is not considered final until a judge accepts the deal, and Tordil could still back out.

But as part of the scheduled plea hearing in Montgomery, State's Attorney John McCarthy is expected to give the most detailed rundown to date of Tordil's rampage from May 5 and May 6. It is unknown what details he will proffer. But in court filings this year, McCarthy laid out a 10-page narrative that outlines ground he likely will cover.

The filing asserts that marital strife led Tordil to kill his wife in Prince George's as she sat waiting for her two daughters outside a school. Then, knowing he was being hunted, he tried twice to ditch his car, carjack two SUVs in separate locations, and shoot four strangers, according to the prosecutor's account.

"The defendant slid from a sworn police officer and family man into a malicious murderer," McCarthy wrote.

McCarthy declined to comment Monday, as did Allen Wolfe, the head public defender in Montgomery whose office represents Tordil.

The roots of the rampage, McCarthy wrote in the filing, reach at least to 2015.

At that time, Tordil was living in Prince George's and worked as an officer with the Federal Protective Service. His marriage to Gladys Tordil grew strained, public records show.

On March 3, 2016, she requested a restraining order, alleging her husband submitted his stepdaughters to militaristic discipline that included push-ups and detention in a dark closet, according to Prince George's court filings. Tordil also struck his wife so hard he broke her glasses, and threatened to hurt her if she ever left their marriage, according to the records.

The restraining order was granted. A judge ordered Tordil to surrender his weapons and stay away from his wife and her children. His employer placed him on administrative leave and told him not to report to duty - leaving him "publicly humiliated" and unable to see "his beloved stepdaughters," McCarthy wrote.

"The defendant immediately began contemplating murdering his wife," McCarthy wrote in his summary, noting that Tordil turned over custody of six guns after receiving the court order but kept a seventh - the Glock.

Tordil confided to a friend that he was suicidal, McCarthy wrote, and planned to run his car off a bridge or commit "suicide by cop," a plan that often involves creating a disturbance to draw in police before confronting them with a gun and drawing officers' fire.

In a handwritten journal, found by police after the three fatal shootings, Tordil apologized to his friends and colleagues for what he was about to do, and asked that the "boys in blue" make his death quick, according to the narrative filed in court.

That narrative contends that:

On May 5 at 11:15 a.m. in College Park, Tordil rented the Elantra from an Enterprise Rent-A-Car outlet. A little more than five hours later, he drove into the parking lot of High Point High School in Beltsville, where he knew his 44-year-old wife would be waiting. He approached her while she was in the car, and the couple argued.

"Gladys Tordil began honking her horn and screaming for help," McCarthy wrote. "One of Gladys's daughters approached the car and Gladys yelled for her to run back inside the school. The defendant then lunged into the vehicle and grappled with Gladys Tordil."

A bystander approached and asked if everything was okay.

Eulalio Tordil said everything was fine, and "without warning" shot the bystander and Gladys Tordil, the account filed in court alleges. She was hit by at least three rounds, and died at the scene. The bystander was hit once, and survived. Police would later find 10 bullet casings at the scene, according to the court filing.

Tordil turned off his cellphone, a tactic that, as a police officer, he knew would make him harder to track, and he then drove the rental car around the region "all night," McCarthy wrote.

The prosecutor did not address why Tordil did not leave the area but stated that by the following morning he wanted to change vehicles.

According to the accusations in the narrative:

Outside of Westfield Montgomery Mall in Bethesda, Tordil raised his Glock in the direction of a woman walking to her Toyota RAV4. She screamed. Two bystanders, Carl Unger and Malcolm Winffel, who had been walking toward a Chipotle restaurant, rushed to help.

Tordil shot them both, then shot the woman. Winffel died; the two others survived. Tordil sped off in the Elantra.

The prosecutor's narrative continues to say that:

Less than 30 minutes later, outside a Giant grocery store nine miles away in Aspen Hill, Tordil approached Claudina Molina, who was sitting in her SUV, also a Toyota RAV4. A witness, according to McCarthy, "saw a man approach Molina and attack her by punching her, strangling her, and ultimately shooting her three times. Molina died at the scene."

The struggle stripped Tordil of his glasses. Unable to drive a long distance, he ducked into a nearby Dunkin' Donuts, then a Michaels craft store, then a Boston Market before his capture after an officer noticed his car from a look-out description.

Asked by officers if there was anything in his car they should be concerned about, Tordil said "the gun," according to arrest records. He also said there was "nobody in the trunk," just a golf bag.

McCarthy's narrative describes how police put their case together.

At the three scenes, they found 21 bullet casings, which they were able to link to the gun found in the car, Tordil's Glock, the records state. Police also found a notebook in the car, with an entry apparently made after the first shootings.

"The notebook, which was handwritten in technical police nomenclature, stated that the writer went to High Point High School to ask his wife Gladys Tordil to help him with a loan and vehicle registration," according to court records. In the journal, too, "he admitted to shooting his wife 'several times in the upper body/head.'"