There was plenty of inspiration for a struggling Maryland men’s basketball team to draw from Saturday night against Iowa. Along with a raucous crowd, there were the school’s two Final Four teams and Hall of Fame coach Gary Williams.None of that seemed... 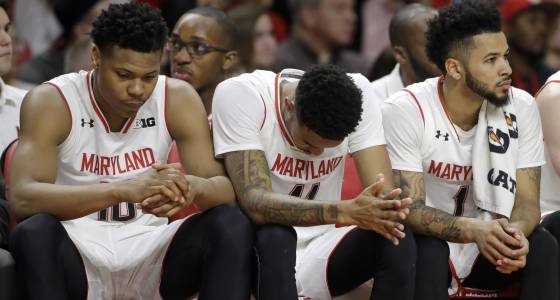 There was plenty of inspiration for a struggling Maryland men’s basketball team to draw from Saturday night against Iowa. Along with a raucous crowd, there were the school’s two Final Four teams and Hall of Fame coach Gary Williams.

None of that seemed to lift the young Terps nor faze the equally young Hawkeyes.

Led by freshmen Jordan Bohannon and Tyler Cook, Iowa torched Maryland’s defense from 3-point range and manhandled the Terps inside en route to a never-in-doubt 83-69 victory.

It got so bad that for the first time this season, the No. 24 Terps were booed by their own fans at home in the second half when Iowa reserve Nicholas Baer missed a shot and scored on a drive after not being boxed out.

“Obviously we didn’t play very well today,” a dejected Turgeon said after the game. “We didn’t defend. I thought Iowa was terrific.  I don’t want to come in here and brag about Iowa like I did Minnesota. They were terrific, but we had a lot to do with it.

“We’re just not playing well. We’re not playing with any confidence. I told the team there’s a lot to play for. We’re still 15 games over .500 and we’ve got two games left. A lot of teams go through this late in the year and turn it around. Hopefully we’re one of those teams. That’s our plan.”

Bohannon, a 6-foot point guard who came into the game averaging 9.2 points per game and shooting 37 percent on 3-pointers, scored a career-high 24 points. He shot 8-for-13 overall, including 8-for-10 on 3s, to go with five assists despite playing with a sprained finger on his shooting hand.

Catch up on the latest on every player and coach from the 2001-02 Maryland men's basketball team, which won the program's first national championship.

“We guard everybody. When you look at the stats the last two games, we don’t guard anybody,” said Turgeon, whose team surrendered 16 3-pointers in 26 attempts and 30 on 62 shots overall. “We know [Bohannon] is a shooter. We made some mistakes defensively, but he made some tough shots. He got going.”

Cook, a 6-9 forward who was averaging 11.8 points per game, scored 15 of his 21 points in the first half, and grabbed 10 rebounds. Senior Peter Jok, the Big Ten’s leading scorer at 21 points per game, finished with just 11 points on 3-for-10 shooting.

“I thought we did a good job on Jok, but the rest of them were terrific,” Turgeon said. “I thought Tyler Cook was the difference. Bohannon made shots, but Cook really dominated the game.”

Said freshman wing Kevin Huerter, “We didn’t think we were terrible defensively. It was definitely their night.”

Trailing by as many as 11 in the first half and by seven at halftime, a 3-point shot by Huerter to start the second half cut the deficit to four and the crowd -- pumped up by the appearance of Williams and his players from the 2001 Final Four team and 2002 national championship --roared.

But as he did all game, Bohannon quieted the crowd with a 3-pointer and the lead grew to as many as 22 points, 80-58, on a 3-pointer by Baer with 3:49 left in the game. A little earlier, the crowd loudly booed when junior Jared Nickens failed to box out Baer, who scored on an easy layup.

Asked if the one-sided defeat was made more difficult because of the Maryland basketball royalty in attendance, Turgeon said, “I wish we had played better for the teams and the coaches, but we didn’t. We need a little bit more positive energy moving forward, a little more confidence.”

Maryland’s freshmen, who played a big part in the team’s 20-2 start overall and 8-1 start in the Big Ten, could not match Iowa’s twosome. Huerter finished with a team-high 13 points and five assists, point guard Anthony Cowan scored 11 points and forward Justin Jackson had nine.

Junior guard Melo Trimble, who seemingly had broken out of a prolonged shooting slump in recent road games at Northwestern and Wisconsin, continued his cold shooting from the loss to Minnesota (4-for-12, 1-for-6 on 3s). Trimble finished with 10 points on 4-for-13 shooting, making just one of nine 3-pointers.

“I thought they did a good job on Melo, but none of us played well,” Turgeon said.

Maryland’s fifth loss in the past seven games could put a team that was in contention for a Big Ten championship a week ago in danger of dropping out of the top four spots and a first-round bye in the conference tournament.

“We know we’re going through a little funk right now," Huerter said. "Teams sometimes go through this. We’re just looking for our next opportunity to get better."

The Terps play at Rutgers on Tuesday before finishing the regular season Saturday against Michigan State.

If this Maryland team has anything in common with either of its famous predecessors that were honored at halftime Saturday, it’s that the 2001 Final Four team dropped three straight games in February and was booed off the court at Cole Field after a loss to Florida State.

Not that Huerter is old enough to remember that or even that he and his teammates heard the boos directed at them late against Iowa (16-13, 8-8).

“We didn’t,” Huerter said. “I saw a lot of people clapping.”