March to get off to stormy start, with damaging winds possible

March 2017 is expected to come in like a lion, with a stormy weather pattern dominating the first few days, forecasters say. Wednesday, the first day of the month, could turn out to be a repeat of last Saturday. The temperatures are expected to rise to near-record... 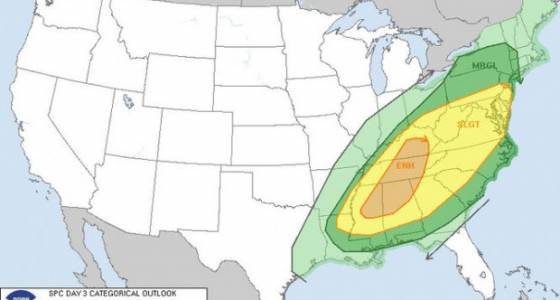 March 2017 is expected to come in like a lion, with a stormy weather pattern dominating the first few days, forecasters say.

Wednesday, the first day of the month, could turn out to be a repeat of last Saturday. The temperatures are expected to rise to near-record levels and the warmth will likely stir up strong thunderstorms that could bring heavy downpours and powerful wind gusts to New Jersey, according to the National Weather Service and AccuWeather.

7 signs of strange weather in February 2017

Courtney Spamer, a meteorologist at AccuWeather, said a storm system moving from the Mississippi Valley to the eastern United States on Wednesday will be packed with moisture from the Gulf of Mexico and will gain strength from the unseasonably warm air that will be in place.

"There will be the potential for damaging wind gusts," Spamer said.

Although it's too early to issue any formal thunderstorm watches or warnings, the National Weather Service offices in Mount Holly and Upton, N.Y., have posted hazardous weather outlooks saying strong to severe thunderstorms could develop Wednesday afternoon and Wednesday evening across eastern Pennsylvania, New Jersey, New York City and the lower Hudson Valley in New York.

Aside from the storm potential, the first day of March could continue a popular trend from February, with daytime temperatures rising near record territory, the weather service said.

Among the daily record highs being watched on Wednesday are these, all of which were set in 1972:

On Friday, another storm system could move across New Jersey, but temperatures may be cold enough for some light snow to fall before the precipitation changes to rain, forecasters said. As of now, there's only a 30 percent chance of snow in northwestern sections of New Jersey on Friday night and a 30 percent chance of rain showers in other parts of the state.