Many take to Boulder streets to protest Trump science stance

The demonstrations that have become a weekly occurrence in downtown Boulder on Saturday mornings have generally taken an anti-Donald Trump bent, and this Saturday's March for Science was no exception. But for Boulder resident and demonstrator Kelsey Hickok,... 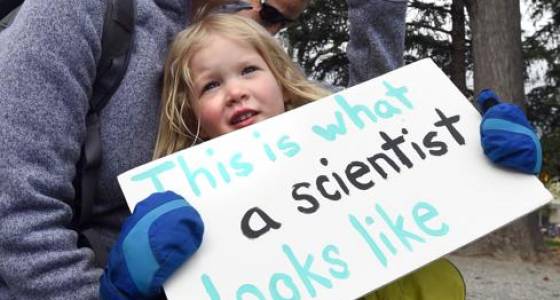 The demonstrations that have become a weekly occurrence in downtown Boulder on Saturday mornings have generally taken an anti-Donald Trump bent, and this Saturday's March for Science was no exception.

But for Boulder resident and demonstrator Kelsey Hickok, the march was about climate change and the fate of the human race, two issues she said go far beyond partisan politics.

"It's about how science should not be politicized," Hickok said. "Facts are facts. ... Climate is not weather. Science does not care. It is something that is happening."

Hickok joined about a 1,000 other marchers who walked east down Canyon Boulevard from the Glen Huntington Bandshell and north to Pearl Street to the Bolder County Courthouse. Marches were being held in Denver, across Colorado and around the world on Saturday, which was also Earth Day.

Thousands of protesters massed in Civic Center Park in Denver, for the biggest demonstration there since the Women's March which took place the day following Trump's inauguration.

Also in Boulder on Saturday, more than 80 senior citizens from Frasier Meadows, Golden West, Flatirons Terrace and the Carillon walked for science around We left Frasier Meadows front door and walked around Thunderbird Lake, carrying colorful signs and protesting what they termed the Trump administration's assault on science and evidenced-based facts.

Penny Duncan was standing along Broadway Avenue in Boulder with a placard plugging the Climate March, which is to take place in Denver and nationally, next week.

She said she has never considered herself someone who would come out to demonstrations and marches, but she has attended several recently.

"It would seem they are necessary," she said. "It's not a partisan issue. It's a global issue."

Fort Collins Resident Robb Terrell pointed to his placard which read "Trump is not healthy for children and other living things," and said that is why he made the trip to Boulder on Saturday morning.

He said that it's unacceptable to him that the Trump Administration is working to dismantle the Environmental Protection Agency — the president has proposed slashing its budget by 31 percent — allow coal companies to "dump crap in the water" and deny that climate change is a reality.

"I don't grok the mindset that allows them to deny it," he said, adding that he thinks people should read or reread George Orwell's dystopian novel "1984" because "it's eerie."

Fairview High School science teacher Dan Albritton said that education is essential for ensuring that people believe that climate change is a real thing. He added that science education is important because science is and what will get humanity through the problems it faces.

"If kids know how people interact with the planet, they can make informed decisions," he said. "If you can teach critical thinking, you set them up for the future so they can analyze what is going on."