HOUSTON (AP) — A California man is facing possible prison time in Texas after he was arrested while carrying his supply of medical marijuana as he drove to Houston to visit his hospitalized granddaughter.The case of Phillip Blanton is an example of... 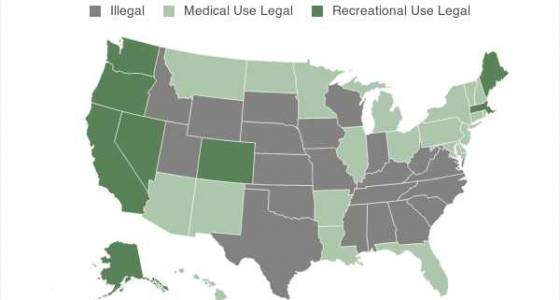 HOUSTON (AP) — A California man is facing possible prison time in Texas after he was arrested while carrying his supply of medical marijuana as he drove to Houston to visit his hospitalized granddaughter.

The case of Phillip Blanton is an example of the nation's conflicting attitudes toward marijuana, the Houston Chronicle (http://bit.ly/2lUP21H ) reported.

Medical marijuana is legal in 28 states and the District of Columbia.

In 2015, Texas passed a law letting patients with a rare form of epilepsy be legally treated with cannabidiol, or CBD, a compound found in the marijuana plant. The law specifies minimum levels of CBD a product must have and permits only trace amounts of THC, which is the psychoactive chemical that produces a high. Texas is still working to issue licenses to retailers for the sale of medical marijuana-based products and the law is set to be implemented by Sept. 1.

Blanton, 67, a retired Pentecostal minister and prisoner counselor, said he'd brought his supply of medical marijuana, about four ounces and dozens of marijuana-laced cookies, to treat chronic pain he suffers as a polio survivor. Medical marijuana is legal in Blanton's home state of California.

Authorities in Wise County near Fort Worth, where Blanton was arrested, are still deciding whether to bring his case before a grand jury.

"It is getting to be a stark disparity between states, one more example of the polarization of the country," said Melissa Hamilton, a visiting criminal law scholar at the University of Houston and a former police officer. "But in this case, it can be particularly confusing. There's usually a reciprocity between states — driver's license, marriage license, university degree, adoption papers, all are valid across state lines. But not a marijuana prescription."

The Trump administration announced Thursday it will step up enforcement of federal law against recreational marijuana, now legal in eight states and the District of Columbia. The crackdown would not pertain to medical marijuana, White House spokesman Sean Spicer said

Before he left Texas, Blanton spent two days in Austin, where three medical marijuana bills have been filed in the current legislative session.

Blanton was encouraged by his meetings in Austin, but he says he's not banking on a change in the Texas law anytime soon.

"I've been to Texas half a dozen times before this, but I hope it'll be a while before I return," Blanton said. "I'm scared of going back."