A Kansas man who’s been referred to as a hero for trying to stop a deadly shooting final week stated he was "happy" to risk his life to save other people and that he's grateful for how his neighborhood has united following the incident. Ian Grillot,... 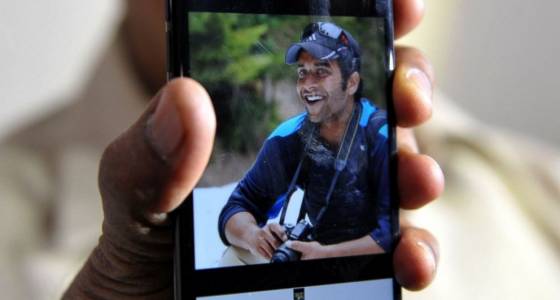 A Kansas man who’s been referred to as a hero for trying to stop a deadly shooting final week stated he was "happy" to risk his life to save other people and that he's grateful for how his neighborhood has united following the incident.

Ian Grillot, 24, intervened to quit a gunman who witnesses mentioned yelled "get out of my country" before shooting two Indian males in Olathe, Kansas final Wednesday, killing one particular.

Adam Purinton, a 51-year-old Navy veteran and former air targeted traffic controller, is getting charged with murder and attempted murder in the shooting that killed Srinivas Kuchibhotla and wounded Alok Madasani, both 32-year-old staff of the technologies company Garmin.

Authorities are investigating if the shooting was a hate crime. Purinton is getting held on a $two million bond and is scheduled make his 1st court appearance on Monday.

“This is a very terrible way of it taking place, but, I'm so grateful that it is actually bringing the neighborhood collectively as an alternative of driving them apart," Grillot mentioned in an interview posted on the University of Kansas Hospital's YouTube page on Sunday. “It is such a attractive point. I adore it.

“I was more than satisfied to danger my life to save the lives of other folks,” Grillot said. “I thank everyone for drawing collectively and supporting me and the other families affected by this.”

Grillot said he is recovering from gunshot wounds to his hand and chest. He said he was “doing a lot superior,” but still sore and feeling the aftermath from “the bullet lodged in my ribs.”

People traveled from as far as India and Washington, D.C. to attend a prayer vigil for Kuchibhotla and the other victims in Olathe on Sunday.

Representative Kevin Yoder (R-Kan) attended the vigil and posted about it on his Instagram account, calling the incident a "wonderful tragedy" and saying "thousands of concerned citizens came collectively to assistance 1 another and the Indian community."

#OneOlathe I am so proud of the robust Indian community we have in the Third District. Tonight, at the Let us Stand Collectively Prayer Vigil, thousands of of concerned citizens came collectively to assistance 1 an additional and the Indian community in this time of fantastic tragedy. I was in a position to visit with and encourage Alok Madasani, who survived the shooting last week. Amongst other items, we discussed his hope to get back to his favored sports quickly - which includes cricket. We also remembered the life of Srinivas Kuchibhotla, who sadly passed final week, and the heroism of Ian Grillot, who is nonetheless in the hospital. Via prayer and thoughtful reflection, we focused on the unity of our community following this horrific attack. We should resolve to stand collectively to promote tolerance and support the rich diversity that tends to make our neighborhood so powerful.

Numerous of the vigil’s attendees, such as Mike Johns of Olathe, mentioned they were there to rally for peace.

“This isn’t Selma, but this is close,” Johns told ABC affiliate KMBC on Sunday. “We’re marching, just like Dr. Martin Luther King [Jr.] did, for peace.“

ABC News' Devin Villacis and the Connected Press contributed to this report.