Man gives up after nearly 3-hour standoff in Bethlehem Twp.

A 31-year-old Stroudsburg man was taken into custody after a nearly three-hour standoff Tuesday afternoon in Bethlehem Township, police report. A bail bondsman saw William Ortiz, of the 100 block of Ed Christine Drive, and alerted police just after 3 p.m.... 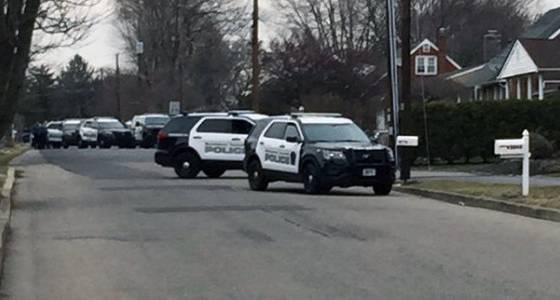 A 31-year-old Stroudsburg man was taken into custody after a nearly three-hour standoff Tuesday afternoon in Bethlehem Township, police report.

A bail bondsman saw William Ortiz, of the 100 block of Ed Christine Drive, and alerted police just after 3 p.m. when the man sought by Monroe County authorities after he failed to show up for sentencing went into 3602 Hodle Ave., township police Sgt. Rick Blake said.

A man was seen soon after near a shed in the fenced in backyard of the home, but appeared to reenter the home, Blake said.

William Ortiz, 31, of Stroudsbug, was taken into custody the evening of Feb. 28, 2017, after a nearly three-hour standoff at 3602 Hodle Ave. in Bethlehem Township, police say. (Courtesy photo | For lehighvalleylive.com)

With Abraham Oritz using a bullhorn to ask the woman and child to come out, township police called in a K9 from Colonial Regional police to search the shed area and the Pennsylvania State Police Special Emergency Response Team, Blake said.

Just before a state police corporal arrived to evaluate the situation for the emergency response team, a man could be seen moving near the front door, Blake said. William Oritz, who wasn't armed, surrendered about 5:45 p.m., Blake said.

"He finally had the common sense to come out," Blake said.

The woman and child then exited as well, Blake said. Abraham Ortiz, who eventually was cooperative, wasn't charged with a crime and was released, Blake said.

"All things considered, what looked bad in the beginning turned out quite well," Blake said.

William Ortiz wasn't charged with crimes in Northampton County and was returned to Monroe County jail on the warrant, Blake said.

William Ortiz was charged Jan. 4, 2016, with possession with intent to deliver drugs, possession of a firearm while prohibited, two minor drug offenses and recklessly endangering another person, court papers say. He pleaded guilty on June 8 to PWI and the endangering charge, which was initially filed as endangering the welfare of a child by a parent or guardian but later changed, court papers say.

After twice getting his sentencing postponed, his third request was denied and when he didn't show up Oct. 11, a bench warrant was issued for his arrest, court papers say.

The bail company's request to go after William Ortiz was denied on Oct. 20, court papers say.