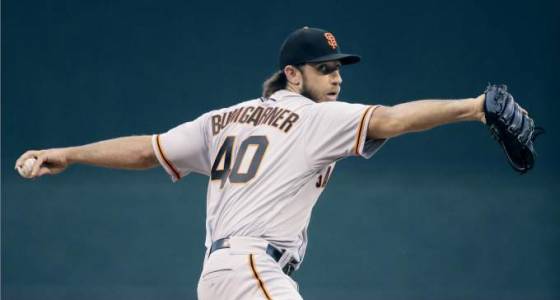 He’s getting the same spectacular results.

It was the 12th start in a row Vargas (3-0) had allowed two runs or fewer, extending his own franchise record for a left-hander.

And it’s a streak that began prior to Tommy John surgery that kept him on the sideline until the tail-end of last season, when he returned as if nothing was amiss.

“I think he’s even better now,” Royals manager Ned Yost said. “I think his command is better. I think the action is as sharp as can be. I think he’s pitching fantastic.”

Vargas scattered four hits over seven innings with nine strikeouts and no walks before turning it over to Joakim Soria, who pitched a perfect eighth. Kelvin Herrera worked around a leadoff walk in the ninth to earn his third save and wrap up a 5-3 homestand for the Royals.

“It’s definitely nice to see some results for the work that’s been put in,” said Vargas, who is also unbeaten in his last eight home starts. “My command has been really good thus far.”

Bumgarner (0-3) matched Vargas pitch for pitch until the fifth, when Paulo Orlando managed a one-out single. He stole second, took third on a groundout and went home when Mike Moustakas hustled down the line to beat out an infield hit, his first with runners in scoring position this season.

That ended Bumgarner’s streak of 18 scoreless innings against the Royals, dating to the 2014 World Series opener. That run of dominance included a brilliant start later in the Series and five innings of scoreless relief in Game 7, when Bumgarner earned the save that finished the championship.

“I felt like I made pretty good pitches. I just missed here and there,” he said. “I had a lot of traffic I had to work through. It was just one of those days where I had to grind it out.”

Bumgarner allowed one run, seven hits and a walk while striking out four but was done in by another poor night by San Francisco’s offense.

The lanky left-hander has only received five total runs of support in his first four starts, including one run or none in three of them.

Salvador Perez added an RBI single in the eighth, the third run surrendered by Giants relievers in the past nine games, and one that gave Herrera some breathing room in the ninth.

“We just couldn’t score a run,” Giants bench coach Ron Wotus said. “We couldn’t get a key hit tonight and they did.”