'Lynch with another block ... and another one' Watch all 11 blocks vs. Penn State

As a team, the Gophers extended their NCAA tournament credentials that much more over the weekend by beating Penn State for their seventh straight victory and a 10-6 record in the Big Ten with two games to play.But it was center Reggie Lynch who attracted... 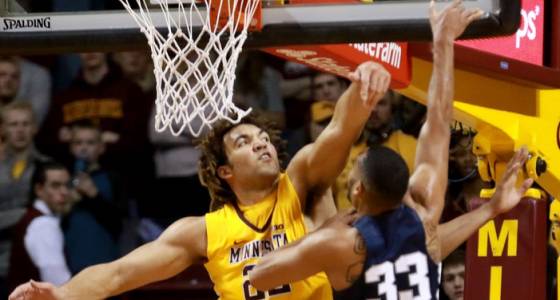 As a team, the Gophers extended their NCAA tournament credentials that much more over the weekend by beating Penn State for their seventh straight victory and a 10-6 record in the Big Ten with two games to play.

But it was center Reggie Lynch who attracted the individual attention by blocking 11 shots -- setting a single-season record for the Gophers and coming within one block of Mychal Thompson's single-game record that has stood for 41 years.

If you missed it, here's a video reel of all 1 blocks by Lynch, whose work caused the Williams Arena crowd to break out in a chant of "Reg-gie! Reg-gie!" as game neared its end.

If the video does not appear on your device, click here.