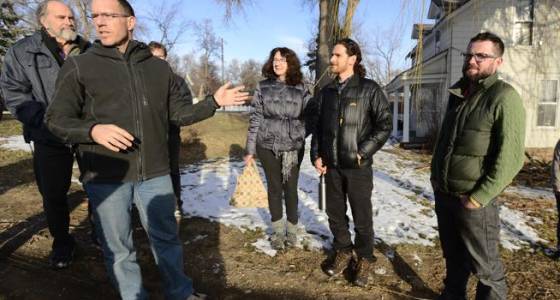 He also presented the final concept plans at Sunday's open house, with 46 units — including six commercial units — planned for the community at the southwest corner of Spruce Avenue and Grant Street.

"We're averaging 20 to 30 people at community meetings," he said. "People are starting to really get it and understand cohousing. It's really inspiring."

The goal is to include people of all ages and backgrounds living and working together, with an emphasis on sustainability. The community is planned, owned and managed by the residents.

Longmont's Elli Varas attended Sunday's open house because she wanted to learn more about the plans.

"I was curious," she said. "Cohousing makes a lot of sense. It's cool that something like this is happening right in Longmont."

There's also parking, including a parking garage for the multi-family building, a commercial kitchen, green roofs and 8,000 square feet of common spaces. The CSA could include chicks. bees and even bats for insect control.

The commercial live/work spaces, planned to go along Spruce, would be for small businesses such as massage therapy or an art gallery. Along with community-supported agriculture, the housing community also plans to appeal to artists.

A small house on the property would be preserved and moved to the 1.1 acres of the property donated to the city for a public park and trail.

Up next, Spaulding said, is presenting the concept design at a March 14 neighborhood meeting and then starting on schematic designs.

"We're very excited about designing it," he said.

The development also is continuing to recruit members, with a goal of building community before building the actual housing.

Basic membership, granting access to the community's meetings, is $150. To be a voting member, the requirements include paying to attend community workshops on topics like CSA business model and community building.

At Sunday's open house, Lafayette's Jocelyn Hunter said she became a member at the $150 level because she's an artist and also likes the idea of being part of a CSA.

"This intentional community is a very interesting concept," she said. "There are more opportunities for like minded individuals to create events."

The Bohn Farm property was annexed into the city in 2005. Spaulding's Colorado Cohousing Development Company bought the property for $1.25 million in August.

Boulder-based Wonderland Hill Development Co., which has built 23 cohousing developments in Colorado and other states, is providing consulting services on the project.