An 11-year-old boy was struck and injured by a vehicle while riding his bike to school across Clover Basin Drive at Airport Road last Wednesday, once again raising worries about the intersection's safety. Concerns of some homeowners in the Clover Creek neighborhood... 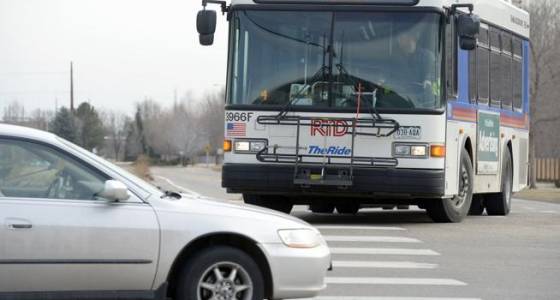 An 11-year-old boy was struck and injured by a vehicle while riding his bike to school across Clover Basin Drive at Airport Road last Wednesday, once again raising worries about the intersection's safety.

Concerns of some homeowners in the Clover Creek neighborhood are also heightened by the controversial 276-unit apartment complex going up on the southwest corner of the intersection that they believe will only crowd the roads with more drivers and more pedestrians — an equation that could mean more collisions.

"We don't want to say 'I told you so' to the city," Ian Capezzano, a resident for eight years, said.

A handful of recent complaints have been sent to Bob Ball. The Longmont traffic engineer said he is responding to the complaints this week.

He said the city is taking action by installing this month "student crossing" signs on all four stoplight arms as well as adding two more protected-permissive left-turn arrows to relieve the buildup of traffic turning left. He said the arrows will lead with green and then turn yellow once pedestrians are allowed to cross.

"Historically, this has not been a high crash location, so there's not an unusually high number of crashes at this location," Ball said, adding that "the traffic volume has been building with all the development going on in the area ... so it's time to put in a left-turn arrows."

Ball also said there were two left-turn arrows installed last week at Nelson Road and Clover Basin Drive, accounting for the recent growth in that part of the city. He said the city considered traffic volume at different times of day, delays and crash reports, which are being released by fall for 2012 to 2016.

Still, residents said their complaints are going unanswered — consistent with feeling unheard from when they first pleaded for traffic and infrastructure studies at the Clover Basin Drive and Airport Road meetup in 2015.

"How is that going to get better when you add in new developments, new residents?" Capezzano said. "It doesn't seem like they tie it all together — that all of these things interact in the long run."

He and his neighbors recognize that the development was approved, so now they're requesting that other crossings in the city receive greater consideration before there's a tragedy. Some are specifically requesting that no vehicles be allowed to turn left when a pedestrian is allowed to walk at their neighborhood intersection.

Anne Tinkum, the mother of the boy who was recently hit, said she wants the city to admit there's a problem that is bigger than what goes reported, since so many have stories of near misses. She said she wants the left arrow either red or green when it's the pedestrian's turn.

"It's a very busy intersection with a lot of children crossing and all it would take is a simple change in the timing of the lights to make the kids a lot safer," she said.

She said one of her friends has said, "Is a child going to have to die before you're going to do something?"

Erin Schneider, who has lived in the neighborhood for almost 20 years, said she has nearly been hit twice — in September and December — while walking in the crosswalk when it's the pedestrian right of way.

"It has gone from a sleepy little intersection to this huge, major thoroughfare," she said.

She said she has seen cars failing to yield to walkers, drivers looking at their phones and speeders, and she witnessed Tinkum's son hit by a car. She said she won't let her grandchildren ride their bike to her house.

Mia McCloy, another resident and Tinkum's friend, said she also has been hesitant to let her 10-year-old daughter ride her bike to school, but she and a friend were almost hit by a distracted driver last year. She said she has heard of more than 10 others who have similar stories.

"We have been told that the city is reviewing and compiling accident reports at that intersection to determine if changes are necessary," McCloy wrote in an email. "We are worried that our concerns will be overlooked if only reported incidents are considered in this review."