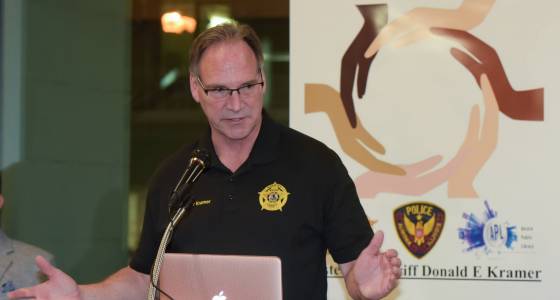 Suburban authorities' reactions range from ambivalence to defiance over the U.S. Department of Homeland Security's plans for a massive deportation effort that includes deputizing local police to assist.

DHS Secretary John Kelly announced Monday the agency would ramp up detention and arrests of undocumented immigrants at the behest of President Donald Trump.

Several suburban sheriffs worried the policy would alienate the public.

"This ... defeats the notion of community policing when you have ICE (Immigration and Customs Enforcement) agents going into communities and scaring people," Lake County Sheriff Mark Curran said Wednesday. "We need to maintain relationships with people in the minority neighborhoods."

DHS also wants to expand a program that gives police the same powers as immigration officers.

The "surge of illegal immigration … has created a significant national security vulnerability to the United States," Kelly said.

Cook County Sheriff Tom Dart has fought against holding undocumented immigrants in jail. If asked to keep an ICE detainee behind bars until a federal agent arrived to deport them, the sheriff would not honor the request, spokeswoman Janet Dela Torre said.

"(The) focus remains to address violence in the city," Dela Torre said. "The new administration doesn't change that."

Lake, Cook, DuPage and Kane officials had no plans to enter into contracts with ICE. For Curran, it's also an issue of space; the Lake County jail is near capacity, he said.

McHenry County does house Immigration and Customs Enforcement detainees in its jail. McHenry officials did not respond to a request for comment.

Under the Obama administration, ICE prioritized undocumented immigrants who had committed serious felonies and people who had returned to the U.S. after deportation.

Kelly continued that policy but also broadened the focus to include "any" criminal offenses, as well as people awaiting trial and those who had committed fraud or lied to the government. The results could affect millions, experts say.

"We are extremely concerned about human rights and profiling of Latinos," Immigrant Solidarity DuPage coordinator Christobel Cavazos said. "Particularly if you are going after people suspected of being criminal. Are you a criminal if you have a light out in your car or if you're speeding?"

The DuPage County jail hasn't housed ICE detainees for at least the past seven years, and Sgt. Bob Harris said it has no plans to do so now.

"If ICE issues a detainer, we generally don't comply with those detainers unless it accompanies a valid arrest warrant," Harris said.

Last year, Kane officers arrested 507 foreign nationals. Of those, 69 were detained by the sheriff to be later picked up by ICE.

It would require a change in state law to require local police to report all undocumented immigrants that are jailed to ICE, Kramer said.

"It's a philosophical difference from the previous presidential administration about at what level we should incarcerate people. Is it going to increase the number of people in custody? Probably," he said. "At my county jail is it going to? Not necessarily."

"We don't want society to be afraid of police. We are actually there to help people," he said.

But Jaime Garcia, executive director of the Elgin-based Centro de Informacion said, "Everybody's scared. We've got people coming in here trying to get themselves ready if they get deported. It's heartbreaking."