Leaders of the nation's historically black colleges and universities want President Donald Trump to increase federal investment in their schools and take a more hands on approach to their interaction with the federal government.Officials with dozens of universities... 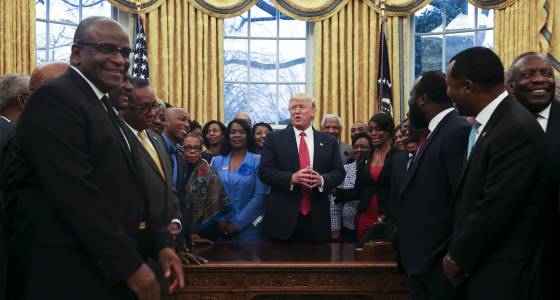 Leaders of the nation's historically black colleges and universities want President Donald Trump to increase federal investment in their schools and take a more hands on approach to their interaction with the federal government.

Officials with dozens of universities -- including Morgan State University in Baltimore and Bowie State University -- met with Trump at the White House on Monday as well as with Vice President Mike Pence to discuss the administration's approach to the schools.

At a meeting with Pence and Education Secretary Betsy DeVos, officials pledged that the administration will partner with the nation's 100-plus historically black colleges and universities. Trump is expected to sign an executive order that would elevate a federal office that coordinates with the universities, making it part of the White House.

David Wilson, president of Morgan State, told The Baltimore Sun that he is "cautiously optimistic" following the meeting, and said the schools will present a plan for major increase in funding that would be used for infrastructure, scholarship and other initiatives.

"We discussed major investments for institutions that are responsible for creating the black middle class in America," Wilson said. "What we heard is that if we come forward with a well thought out action plan and agenda that the White House would be interested in partnering with us. We are taking that very seriously."

There were more than 231,000 students enrolled at black colleges and universities in 2014, according to the National Center for Education Statistics. Almost 80 percent were black.

"Know that beginning today, this administration is committed to making sure that our historically black colleges and universities get the credit and the attention they deserve," Pence said.

Trump received only 8 percent of the African-American vote in his presidential election, though that was slightly better than Republican nominee Mitt Romney received in 2012, according to exit polls. The president has repeated fallen back on rhetoric about "inner cities" and crime when discussing African Americans, language that has troubled many observers.

But university leaders said they were willing to hear the White House out on Monday, and were hopeful that the words would translate into action.

"Anything that the Trump administration could do to channel more federal dollars in form of grants and contracts to and through the HBCUs would really benefit our institutions and in many cases, our communities, as well," said Mickey L. Burnim, president of Bowie State University.

The Associated Press contributed to this article.