U.S. President Donald Trump wants to deport millions of illegal immigrants back to Latin America, at a time when the region is already struggling to address the highest rates of violence in the world, according to a landmark new study.The report, the first... 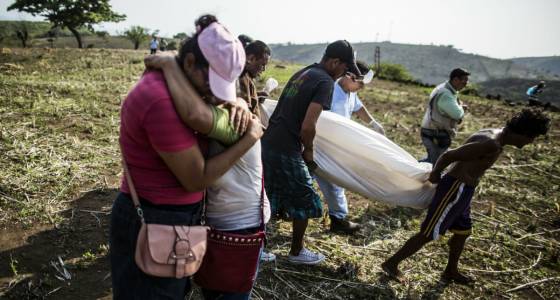 U.S. President Donald Trump wants to deport millions of illegal immigrants back to Latin America, at a time when the region is already struggling to address the highest rates of violence in the world, according to a landmark new study.

The report, the first to measure the economic cost of crime and violence in 17 Latin American and Caribbean countries, found these ills cost the region twice as much as they do countries in the developed world.

“Latin America is the most violent region in the world outside of war zones,” noted the report, released this month by the Inter-American Development Bank.

Crime-related costs in the region total $342 billion a year, a figure that is equivalent to 3.5 per cent of its gross domestic product. That is the same as what is spent on infrastructure, and six times more than Mexico and Brazil direct to social programs.

Mexico has already expressed outrage over Trump’s pledge to deport non-Mexicans in the U.S. to Mexico, calling the plan “hostile and unacceptable.” The country is not prepared to absorb an influx of Mexicans who haven’t lived there in decades, much less deal with a surge of foreigners, said Mexico’s foreign minister, Luis Videgaray, said at a joint press conference with U.S. officials on Thursday.

Trump’s approach to immigration could further destabilize the region, and create difficulties for U.S. border state communities, said Ben Raderstorf, an analyst at the Inter-American Dialogue.

“If relations sour between the U.S. and Mexico, that could put at risk counter-terrorist efforts, counter-narcotics, arms trafficking and other security issues,” he said. “U.S. policies should work to support citizen security in Latin America, not undermine it because that is in the interests of everyone in the region.”

In most other parts of the world, violent crime rates are stable or declining. However, even as countries in Latin America and the Caribbean become wealthier, some are still prone to sudden escalations of violence and spiralling homicide rates.

The reasons are complex: weak states, the flow of cocaine from the Andes to the U.S. market, the deportation of ex-convicts from the U.S. and gang warfare.

To calculate the cost of crime, the economists added up the cost of government spending on judiciary, police and prisons; household and business spending on security; and the forgone income of homicide victims, as well as prisoners over the period 2010-14. They did not include the indirect cost of crime, such as changes in behaviour caused by fear of crime or its effect on health.

The study looked at six benchmark countries in the developed world and found on average they spend half of what Latin America spends on crime. Canada spends 1.39 per cent of GDP on crime, the U.S. spends 2.75 per cent (in part because of its much higher rates of incarceration).

There is variation both between and within countries in Latin America and the Caribbean. Chile and Barbados have relatively low homicide rates and spend less on crime, while the “northern triangle” countries of Guatemala, El Salvador and Honduras have the highest in the world. Honduras spends as much as 6 per cent of its GDP on crime-related costs, as does El Salvador.

Between 2006 and 2014, 240,000 convicts were deported from the U.S. to the northern triangle, many of them members of gangs. Today, two rival gangs in El Salvador, the MS-13 and the M-18, are responsible for 40 per cent of homicides. In March 2012, when gang leadership agreed to a truce, homicide levels fell; after the truce fell apart, murder rates rose to record levels in 2015.

Overall, most victims of homicide in Latin America are male and between the ages of 15 and 30 years old, the population group with the highest labour productivity.

Latin America has also seen a sharp increase in the number of inmates in recent years, a trend that costs the government, deprives society of income and has not proved to be an effective deterrent to violence.

Prisons in Latin America house a high percentage of individuals who have not been convicted of their crimes — in some cases as high as 80 per cent. Overcrowded jails without proper rehabilitation programs themselves become enablers of crime. A dysfunctional judiciary is also a contributing factor.

Finally, the report found, the female homicide rate is double the world average. Nearly one-third of women in Latin America and the Caribbean have experienced physical and/or sexual intimate partner violence.

Enacting laws that treat those who commit crimes against women differently, as well as public policies aimed at reducing gender inequality would help solve this challenge, researchers concluded.