A capacity crowd of at least 1,000 people turned out Saturday morning in Santa Rosa at a town hall meeting organized by Democratic lawmakers to lend support to state and federal efforts to defend health care coverage received by millions of people under the... 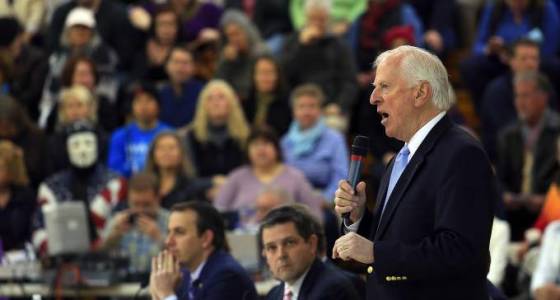 A capacity crowd of at least 1,000 people turned out Saturday morning in Santa Rosa at a town hall meeting organized by Democratic lawmakers to lend support to state and federal efforts to defend health care coverage received by millions of people under the Affordable Care Act.

Gathered in the gym at Piner High School, the audience members gave prolonged applause to area legislators who called for resistance to plans by the Trump administration and the Republican-controlled Congress to do away with Obamacare, the former president’s landmark law overhauling medical coverage.

“I think everybody understands that ‘repeal and replace’ is a cheap campaign slogan,” said Rep Mike Thompson, D-St. Helena, who hosted the gathering. “What we’re talking about is our lives and livelihoods.”

Should the act be repealed, Thompson said, an estimated 23 million Americans would stand at risk of losing coverage, and 3 million health care workers could lose their jobs.

Thompson’s office afterward estimated the crowd at more than 1,000. One staff member earlier put the number at closer to 2,000.

Before the meeting, attendees could be seen walking three blocks or more on Fulton Road to reach the gym after the school parking lot and nearby streets couldn’t accommodate all the parked vehicles.

Thompson was joined at the meeting by six state legislators, including all four representing Sonoma County. In conversations before and after the meeting, the elected officials uniformly expressed how striking it was to behold so many people gathered on a Saturday morning to discuss public policy.

“I’ve never seen it before in my time,” said state Sen. Mike McGuire, D-Healdsburg, who has served in various elected offices for nearly two decades.

Many in the crowd were forced to stand or sit on the floor for the two-hour meeting.

During the presentations by legislators and a panel of health care experts, the audience cheered calls for a single-payer system of insurance and funding for Planned Parenthood. They cheered explanations of how Obamacare guaranteed coverage for those with preexisting health conditions and how it expanded coverage for mental health and drug addiction treatment. They also applauded legislators’ support for efforts to slow the rise of prescription drug prices and ban advertisements for such drugs on television.

The meeting, which was shown live online, didn’t have the confrontational nature that some Republican Congressional members have faced in recent town hall meetings around the nation. If there were opponents to Obamacare in the room, they remained silent.

During their comments, elected officials called for continued defiance and suggested that Republican Congressional leaders eventually will decide it is in their best interest to preserve the Affordable Care Act in some fashion.

Hernandez, the chair of the state Senate health committee, likened the GOP members of Congress to a dog that chases a car and catches it. Now that Republicans have power over the law, he said, “they don’t know what the heck to do with it.”

Thompson similarly pointed to comments last week by former GOP House Speaker John Boehner that Republican Congressional members never once agreed on a healthcare reform plan in 25 years and that they now would “fix the flaws” in Obamacare rather than repeal it.