The onslaught of questions from chemistry to math to physics would have bent most minds in half.But at the whiz kid quiz Saturday known as LADWP Science Bowl XXV, Los Angeles high school students wrapped their heads ‘round most of them with ease.“We... 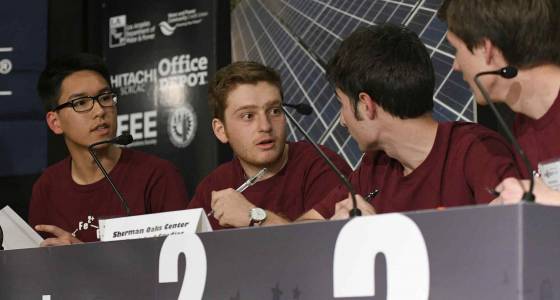 The onslaught of questions from chemistry to math to physics would have bent most minds in half.

But at the whiz kid quiz Saturday known as LADWP Science Bowl XXV, Los Angeles high school students wrapped their heads ‘round most of them with ease.

“We always want to do better,” said Lyna Kim, 15, of Koreatown, a would-be neuroscientist or surgeon, whose North Hollywood High School team had just marched through a morning round. “I think what motivates me most -- and this may sound cheesy -- I just want to know more about how the world works.

“I fell in love with chemistry. Then earth science. Astronomy. And now geochemistry.”

For the past quarter century, the science bowl competition hosted by the Los Angeles Department of Water and Power has spurred a generation of Southland future scientists.

The day-long contest featuring a game show format offers the winner a chance to represent Los Angeles in a U.S. Department of Energy National Science Bowl this spring.

This year, more than 230 students from 27 public and private high schools were vying for $25,000 in scholarships and prizes. Roughly 10 of the schools competing in 18 rooms throughout the LADWP’s downtown headquarters were from the San Fernando Valley.

Since Los Angeles entered the competition 25 years ago, it has clinched the national title four times -- and placed among the top five 11 times -- making it the Whiz Kid Capital of the nation.

Among the national champions were Van Nuys High School, in 1995, and North Hollywood, a perennial powerhouse since it won in 2001.

What makes these kids so smart?

“They work hard,” said Timothy Hemming, chief science judge for the LADWP Science Bowl since 1993. “Four hours a day, minimum, seven days a week. Some work harder than that.”

“I think we’ve just got a lot of talent in Los Angeles,” added George Rofail, the LADWP Science Bowl volunteer chair, a mechanical engineer by training. “And great teachers who bring out the best.”

One of them was Altair Maine, a bearded coach for North Hollywood, who watched a B-team panel of four eke out a 16-minute round-robin win over Cathedral High School.

Among the questions peppered at students were What effects describe the inelastic scattering of photons by three charged particles? And, what type of mass wasting event is created when many different sediments channelize and begin to move in a fluidized mass downslope?

“I just watch and bite my nails,” said Maine, shaking his head afterward. “I do nothing. They pulled it out. They work really hard. They enjoy the heat of science bowl.”

One of the other coaches was Tracey Kim of Van Nuys High School, who teaches Advanced Placement biology, chemistry and research lab.

“I’m just the pusher,” she said. “They just love the material. They take AP classes. And they’re naturals.

“Science Bowl helps them see that, it’s not just about competing within the school, but elsewhere. There are a lot of smart kids out there.”

The day’s winner was expected to be announced at 5 p.m.. The school will get a free ride to Washington, D.C., courtesy of the U.S. DOE Office of Science, to compete in the National Science Bowl starting April 27.

Among the 5,000 kids who have participated in the LADWP Science Bowl was Noah Bray-Ali, whose Venice High School teams took nationals in 1996 and 1997.

As a result, he got a summer job at Lawrence Berkeley National Laboratory, studying advanced light science. Then he went on to Massachusetts Institute of Technology before earning a PhD in physics from UC Berkeley.

“I credit Science Bowl for that summer job,” said Bray-Ali, who now teaches at Cal State Los Angeles and volunteers for the Bowl contest. “And for bringing me back to grad school at Berkeley.

“The DWP has played a very important role in encouraging me.”