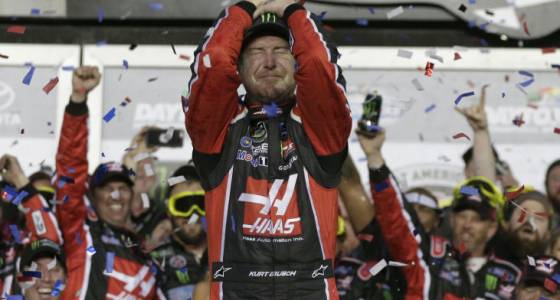 DAYTONA BEACH — Kurt Busch took the lead on the final lap to edge Ryan Blaney and win Sunday's 59th running of the Daytona 500.

Sunday's race was just like the other two this weekend at Daytona International Speedway — filled with wrecks.

The first one came at lap 104, when Kyle Busch blew a tire in Turn 3. Dale Earnhardt Jr. drove over the front of Busch's car to end his day and spoil his comeback from last year's concussion.

"Just sorry we weren't able to deliver a better result today for all our fans and everybody that was looking forward to today," said Earnhardt, who finished 37th.

The collisions continued 21 laps later, when Trevor Bayne tapped Jimmie Johnson to start one of Daytona's famed big ones – a pile-up that damaged 17 cars, including Danica Patrick, Denny Hamlin and Kevin Harvick.

Another big one wasn't far behind. Just after a restart from yet another crash, Jamie McMurray nudged pole-sitter Chase on the backstretch. Elliott wiggled inside, triggering a 12-car crash that damaged Ryan Newman, Brad Keselowski and Hamlin (again).

Tampa native and Hillsborough High alumnus Aric Almirola was one of the beneficiaries of the wrecks, because he somehow stayed out of trouble. His No. 43 Ford took the lead with less than 50 laps to go, but he drifted high, allowing Kyle Larson and 15 other drivers get by him; he never challenged for the lead again but finished fourth.

"It was a wild day," Almirola said.

And Busch prevailed at the end. His car owner, Tony Stewart, said Sunday was the most patient Busch has ever been.

Sunday adds another big accolade for Busch, the 2004 series champion.

This story will be updated.