Gov. John Kasich must stand fast in protecting Ohio's Medicaid expansion, which provides health care to 700,000 Ohioans - about 100,000 of them in Cuyahoga County, 77,000 in adjoining counties. A test of his resolve could come as early as this weekend. Kasich... 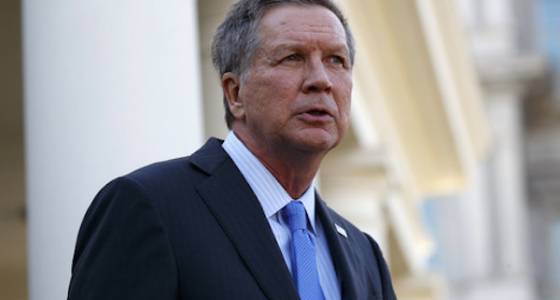 Gov. John Kasich must stand fast in protecting Ohio's Medicaid expansion, which provides health care to 700,000 Ohioans - about 100,000 of them in Cuyahoga County, 77,000 in adjoining counties. A test of his resolve could come as early as this weekend.

Kasich is in Washington, D.C., for the National Governors Association's midwinter conclave -- a round of meetings that could spawn some kind of congressional-gubernatorial Medicaid deal among Republicans.

If so, Ohio needs to get the only possible deal for Ohio -- Medicaid expansion packaged and delivered as it is now. Kasich can't go wobbly on any part of that.

That Kasich, who was the one who made sure Medicaid expansion happened in Ohio, might be going wobbly is suggested by two things.

First, was Kasich's private meeting with President Donald Trump on Friday, widely perceived to be part of an effort by Republican governors to derail an abrupt repeal of Obamacare that could leave their states on the hook for millions of dollars, strand many of their citizens without health care and harm their hospitals.

Kasich later told the Associated Press that the president "listened very carefully to what I had to say about [Ohio's Medicaid expansion] and had a very positive response." That's as clear as mud, but suggests that no commitments were made.

Second were Kasich's comments Friday, as quoted by cleveland.com's Stephen Koff, supporting an eventual rollback of eligibility for Medicaid expansion.

Also suggesting that Kasich is open to a deal that could limit or reverse Medicaid expansion was his commentary posted Friday on Forbes.com that appeared to advocate such a move, but that hedged by saying that, "before making this transition and moving residents off Medicaid, which is stable, the alternative needs to be just as stable."

About our editorials Editorials express the view of the editorial board of cleveland.com and The Plain Dealer -- the senior leadership and editorial-writing staff. As is traditional, editorials are unsigned and intended to be seen as the voice of the news organization.

* Talk about the topic of this editorial in the comments below.

* Send a letter to the editor, which will be considered for print publication.

* Email general questions or comments about the editorial board to Elizabeth Sullivan, opinion director for cleveland.com.

This is all coming amid intensifying horse-trading on what some are now calling "repeal and repair" of Obamacare. None of the options being discussed would be good for Ohio's Medicaid expansion.

The Washington Post reported Friday that one plan being considered by U.S. House Republicans "would 'grandfather in' the roughly 11 million Americans currently on Medicaid-expansion rolls in 31 states," including Ohio.

In other words, new recipients would be out of luck. And still at issue, the Post added: "Whether the extra dollars [for Medicaid expansion] coverage would last a specific length of time or continue as long as a beneficiary remained eligible."

Kasich must oppose this and other efforts to starve Medicaid expansion out of existence. That includes any federal scheme purporting to give Ohio and other states "block grants" in place of Medicaid expansion's current funding setup, by which the federal cost share slowly declines until it reaches 90 percent in 2020 and then remains there.

January: In repealing and replacing Obamacare, first, do no harm - editorial

On Friday, Politico reported on another leaked plan U.S. House Republicans are considering that would "eliminate Obamacare's Medicaid expansion in 2020. States could still cover those people if they chose but they'd get a lot less federal money to do so."

In plain English, if such a plan became law, some of Ohio's most vulnerable citizens would almost certainly lose Medicaid coverage. Morally, that would be wrong. Economically, it would be disastrous for Ohio's hospitals and the state's allied health-care providers.

Some fellow Republicans will undoubtedly pressure Kasich to get with the Trump administration's program, whatever it is.  But "repeal and repair" is really mostly about repeal -- and about walking away from those in Ohio who are counting on Kasich to stand firm.

John Kasich must not agree to such a proposal. Given Ohioans' needs, he simply cannot.