Kate Brown gets an early start on 2018 campaign

Gov. Kate Brown didn't waste any time after her reelection. On Wednesday, Nov. 9, she was right back on the campaign trail. Her calendar shows she spent six hours campaigning that day. She thanked donors, gave media interviews and chatted about the election... 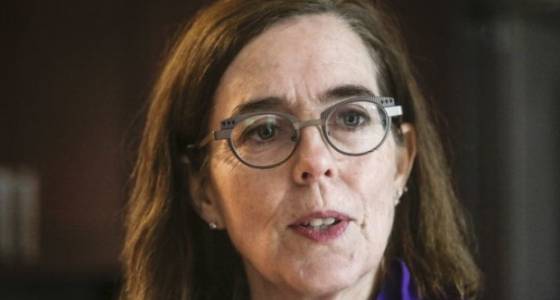 Gov. Kate Brown didn't waste any time after her reelection. On Wednesday, Nov. 9, she was right back on the campaign trail.

Her calendar shows she spent six hours campaigning that day. She thanked donors, gave media interviews and chatted about the election results, her campaign manager says.

But she was also getting a head start on her 2018 race, where she'll likely face stiff competition from Republicans.

Since winning the state's highest office less than four months ago, Brown has devoted an average of six hours a week to calling potential donors, meeting with supporters and other campaign activities, an Oregonian/OregonLive analysis of her calendar shows. That adds up to about 73 hours strictly campaigning.

Over that same period, her calendar shows she has spent an average of 37 hours a week on state business, including working on her budget proposal and assessing the snowstorm damage in Ontario. Those official work hours also include frequent drives between Salem and Portland, daily lunch breaks and appearances at events such as religious services or constituent photo opportunities.

Gov. Kate Brown talks to Malheur County Sheriff Brian Wolfe in front of a collapsed building near Ontario. Brown got a call early Feb. 9 that the Eastern Oregon city and surrounding communities needed help responding to damage from heavy snow. She dropped everything and, on Feb. 10, went there to try to bring attention and emergency resources to their needs.Courtesy of the Governor's office

Key staffers say the scheduled items on Brown's calendar don't reflect all the time she spends fulfilling her role as governor. While campaigning eats into portions of many work days, Brown spends hours most evenings reviewing policy briefs, reading materials to prepare for her next day's appointments, editing drafts of official correspondence and the like, they say.

Brown declined to comment for this story, but members of her staff answered repeated questions on her behalf.

Brown's out-of-the ordinary early focus on her re-election campaign is explained by the unusual circumstances in which she assumed the governorship, then won election to it, political science professors say.

Nearly all governors start out elected to a full four years in office, giving them two years before they need to start campaigning in earnest again. But Brown was appointed to replace disgraced former Gov. John Kitzhaber in early 2015 and had to run for the remainder of his four-year term the following year.

She woke up last Nov. 9 knowing she had won - and that she had little time to build a war chest to launch another public campaign by 2018. That has put Brown into a campaign cycle that is not unlike that of members of the U.S. House of Representatives who perpetually run for re-election to fill two-year terms.

She is logging hours toward that end at a notable pace. For comparison, when Washington Gov. Jay Inslee was two years out from his reelection in late 2014 and early 2015, he devoted about half as much time to fundraising and campaigning as Brown has.

Her total to date of "70 hours strikes me as a little bit high, but only because it's a bit early," said Bill Lunch, political science professor emeritus at OSU. "But she has a limited timeframe, too, so it's understandable."

Since her election, Brown has raised $200,000 and has $1.2 million in cash on hand. Experts say she'll need millions more to convince voters to keep her on the job for another term.

Two potential candidates from the right are Secretary of State Dennis Richardson, the first Republican to win a statewide office in 14 years, and Rep. Knute Buehler of Bend.

Richardson told The Oregonian/OregonLive on Friday that he has no current plans to run and thinks Buehler would make "an excellent governor." Buehler would not comment on his plans for 2018.

Brown beat Buehler in the 2012 race for Secretary of State. But Buehler has gained strength as a candidate since then, in part by showing his prowess at raising money. As of Friday, he had virtually matched the incumbent governor at fundraising in 2017, raking in $97,033 in campaign contributions compared to Brown's $97,454.

"There's a hunger for a strong Republican candidate, and it seems like people are coalescing around him," Moore said.

Brown doesn't just need to guard against the opposing party.

One of the reasons to start campaigning early, Lunch said, is to discourage competitors in the Democratic primary. With enough raised, potential candidates might hold off on challenging her. So far, no likely candidate has emerged from Brown's party.

Either way, the 2018 campaign almost certainly will garner a lot of attention - and money.

Lunch said Brown needs to raise at least $2 million, though $3 million or $4 million would be better for such a high-stakes race. Moore said she could be looking to raise as much as $10 million.

The last time Oregon saw an ultra-big spending race for governor was in 2010 when Kitzhaber raised $7.5 million and his GOP challenger Chris Dudley took in $10.5 million in donations.

"If Knute Buehler is seen by Republicans as someone who has a chance, there's going to be a ton of money coming in," Moore said.

Brown clearly has the upper hand, however, he said. Because Buehler is a relative newcomer, he'll need to raise roughly twice as much as Brown to have a shot at the governor's seat.

As long as she continues to stand up to the Trump administration, as she did by strengthening Oregon's sanctuary status and fighting his travel ban, Brown will be able to ride a wave of Democratic support, he predicted.

A Republican, though, can't win a statewide election by supporting Trump's policies. Buehler would have to differentiate himself from his party's standard-bearer.

"In Oregon, the Republican party is in danger of becoming a third party," Moore said. "The base is smaller for Republicans. So to win, you have to break into the middle somehow."

Oregon was one of a handful of states not affected by the Supreme Court's 2010 Citizens United ruling throwing open the door to gigantic troves of campaign cash. That's because Oregon doesn't put limits on campaign donations, including those from corporations and political action committees.

Still, campaigning in Oregon is not what it used to be, says Len Bergstein, a lobbyist and political consultant who served as campaign manager for former governor Bob Straub.

Once, he said, the election cycle was clearly defined: There were times to govern, and times set aside to campaign. Now, though, "there's a perpetual campaign mentality," he said. "All offices, at all levels, campaign parts of the job are now always present."

And today's races are more intense and costly, Bergstein said.

Brown looks to be gearing up for a big race, Moore said. She has the incumbency on her side, as well as a campaign staffers she can roll from one election to the next.

But in one way, she could be at a disadvantage. Research shows that, while female candidates regularly raise campaign money on par with their male counterparts, they report being excluded from the circles that include the wealthiest and best-connected donors.

According to the Barbara Lee Family Foundation, which publishes nonpartisan research on women in politics, these circles are often essentially "old boys' clubs," made up of companies with few women executives or board members.

To combat this, the foundation encourages female candidates to get an early start on campaigning - as Brown did.

Since Oregon's Legislative session opened Feb. 1, she has dedicated less time to campaign activities. She spent two full days in late January on the East Coast meeting supporters, but as of Feb. 19, had only spent 5 1/2 hours campaigning since the session started, her calendar shows.

"We are a long way off from the election," he said, noting that Brown hasn't officially announced her candidacy. "Certainly there's an expectation after the legislative session that she'll spend more time talking to supporters and working on campaign activities."

Campaign season will begin in earnest next year, and her campaign schedule will be "more rigorous" then, Wheatley said. That works out well for Brown and other candidates, as the Legislature will convene for a short session: five weeks, compared to about five months in the current long session.

After judges, Brown is the next-highest-paid elected official holding state office in Oregon. She draws an annual salary of $98,600, plus $1,000 per month for expenses. She is also provided a Salem home to live in and a car and driver to take her to events and to and from work each day.

Most salaried workers are expected to put in at least 40 hours a week. Brown's calendar shows that she spends an average of 37 hours a week on scheduled state business, including frequent meetings with key advisers, hours-long tours of local businesses and quick check-ins with individual lawmakers.

Bergstein, who also served on Straub's gubernatorial staff, scoffed at the 37-hour count.

"I don't think the governor leaves their job behind them," he said. "I find that they're on the job all the time. If you're counting something less than 24 hours a day as governor's work, someone's undercounting the time on the job."

Pair, Brown's spokesman, echoed Bergstein, saying she serves as governor 24 hours a day, seven days a week. Items that don't appear on her calendar, he said, include unscheduled calls, informal meetings, work she does at home and in response to emergencies.

For instance, Pair said, Brown called him at 11:30 p.m. on Wednesday, then texted him about a different issue at 6 a.m. the next morning. "This was after spending much of her day working and traveling and before a fully booked day of meetings and events," he said.

Though national politics will certainly affect Brown's 2018 run, her chances hinge in part on her leadership in the current legislative session, in which lawmakers are tasked with closing a $1.6 billion budget gap and crafting a transportation funding package.

So far, she's been left out of talks orchestrated by Democratic leaders to bring union and business leaders to the table to talk about new revenue and spending cuts. Senate President Peter Courtney dismissed her proposed budget in a diatribe about the lack of leadership in Oregon.

Brown's office says she is proud of her proposed budget, delivered on time in December. She built it using a mix of targeted taxes and other fees to avoid the more draconian cuts proposed by the Legislature's budget co-chairs.

Her willingness to call for specific higher taxes allowed her to put forth a plan that better meets the education and healthcare needs of people she met with who need critical services, said Pair.

"Legislative session is an important and busy time but success can only really be measured at its close and certainly not in its third week," he said. "Oregonians are ultimately the ones to judge what Governor Brown's legacy will be."