Kasich and Trump air it out: Darcy cartoon

CLEVELAND, Ohio -- Governor John Kasich came out of his meeting with President Donald Trump offering the sound aviation advice that if you're on a plane, you should be rooting for the pilot. "I think, look, the man is the president of the United States. ... 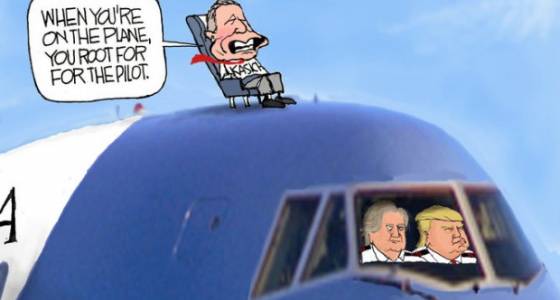 CLEVELAND, Ohio -- Governor John Kasich came out of his meeting with President Donald Trump offering the sound aviation advice that if you're on a plane, you should be rooting for the pilot.

"I think, look, the man is the president of the United States.  It's sort of like being on an airplane: You want to root for the pilot if you're on the airplane with the pilot. You don't want the pilot to screw up,"  said Kasich to reporters, after walking out of The White House.

Not liking the tone of Trump's campaign, Kasich skipped the Republican National Convention in Cleveland and wrote in Senator John McCain on his presidential ballot. Despite how the campaign finished, Kasich did attend Trump's Inauguration, and the two share some key personality traits.

Kasich, like Trump, is known for speaking his mind, being blunt and at times gruff.  With Kasich, however there can be less charm and humor than you see with Trump, even when Trump's being a bully.

Recalling his start as governor, Kasich told Trump the advice his wife Karen had given him.  "When I first became governor, there was some things that I was doing to the point where my wife said to me 'you're the father of Ohio, act like it.'   It takes time for people to get stabilized.  We all want to wish this president the best, but that doesn't mean that when I wish him the best that there might be things that I see that I don't agree with and I'm going to say that."

Did Kasich and Trump have a staring contest ?

Kasich did not say if he and Trump had a staring contest to see who would blink first.  It wouldn't be surprising if they did, after conflicting claims on which of the two sought the meeting.

White House Press secretary Sean Spicer said, "Governor John Kasich has reached out on multiple occasions to meet with the president."  Spicer said the president was open to meeting  with "anybody who can help move they country forward and share in his vision."

Kasich's adviser John Weaver had tweeted that the meeting was Trump's idea, while adding a hashtag promoting Kasich's new book.

"@ JohnKasich respects office of the President &  is happy to meet with Trump at the president's repeated requests. #TwoPaths"

What's not disputed is that the future of Obamacare was a main topic of discussion between the two presidential campaign adversaries.

It appears any plan will have to come from The White House, just as was the case with the Obama Administration.

A governor like Kasich would be valuable to the White House in forming a plan and getting it passed in Congress.  Governors will be pivotal to implementing any new plan and its success or failure. Kasich is notable for having broken with the GOP on expanding Medicaid.  It's also often forgotten or overlooked that Kasich once served in Congress.

Trump himself has never really towed the party line on Obamacare.  Early on he said there were aspects of the plan he liked and wanted to keep.  In his most recent remarks on the topic, he vowed that it would be fixed and made better.   His rhetoric leaned more toward "repair" than "replace."

Satruday, Kasich had a follow-up meeting with Reince Priebus.  Wonder if Priebus asked Kasich to 'knock down' press assertions that the Bowling Green massacre story was bogus, by confirming that The Ohio State Buckeyes did in fact massacre the Bowling Green Falcons 77 to 10, but that it happened in Ohio, not Kentucky.