A judge late Monday dismissed all charges against one of four men involved in the November 2015 shooting of Black Lives Matter protesters.Daniel Thomas Macey, 27, of Pine City, faced one count of felony riot and five felony counts of aiding an offender, Lance... 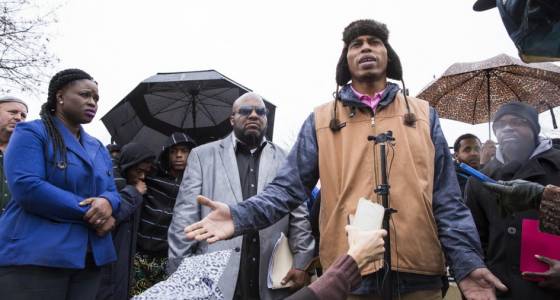 A judge late Monday dismissed all charges against one of four men involved in the November 2015 shooting of Black Lives Matter protesters.

Daniel Thomas Macey, 27, of Pine City, faced one count of felony riot and five felony counts of aiding an offender, Lance Scarsella, who fired the shots and was convicted in early February of felony first-degree assault and riot. He awaits sentencing April 26.

Defense attorneys have also filed motions to dismiss charges against the other two co-defendants, Nathan Gustavsson, 22, of Hermantown; and Joseph Backman, 28, of Eagan. The judge presiding over all of the cases, Hilary Caligiuiri, has not made a ruling on the latter two defendants.

In Macey’s case, Caligiuiri ruled that prosecutors did not have enough evidence to support the charges. Macey was not with Scarsella when the shooting happened, and prosecutors also couldn’t prove that Macey destroyed any evidence after the shooting.

Scarsella and another man, Julio Suarez, wore masks and videotaped themselves on Nov. 19 making racist comments as they drove to north Minneapolis police precinct. Protesters had formed an encampment there following the death of Jamar Clark, who was killed by police about a week earlier.

Scarsella and the three other men returned on Nov. 22, where video shown at Scarsella’s trial showed the four stood along a fence as they livestreamed the protest. Protesters quickly gathered around the four men, demanding they uncover their faces. The four refused, then fled from the fence as protesters pursued. The pursuit stopped, but then several protesters said they heard someone from Scarsella’s group shout the N-word. Judge dismisses charges against Daniel Thomas Macey in connection with the Fourth Precinct protest shooting.

About a block from the initial skirmish Scarsella fired eight shots, wounding five.

At Scarsella’s trial, Caligiuri wrote, it was made clear that Macey and Backman were not with Scarsella and Gustavsson during the shooting.

Prosecutors also alleged that Macey and the three others conspired to destroy computer and phone files to stunt the police investigation. But an expert for Macey’s defense said that the only files Macey deleted were Japanese cartoons and had nothing to do with the shooting. Prosecutors did not refute the expert’s opinion.

“The facts before the court thus do not contain probable cause to believe Defendant Macey destroyed or concealed evidence of a crime,” Caligiuri wrote.

Macey’s attorney, Ryan Garry, said Tuesday that his client “never should have been charged in the first place.”

“It’s been a difficult 15 months for Mr. Macey,” he said. “He is extremely relieved and glad to put this case behind him.”