John Kasich meets with Donald Trump and other Republicans in D.C. to try to save Medicaid expansion. Ohioans have differing views on whether the new Democratic National Committee chair will attract or repeal Bernie Sanders voters. And David Pepper says time's... 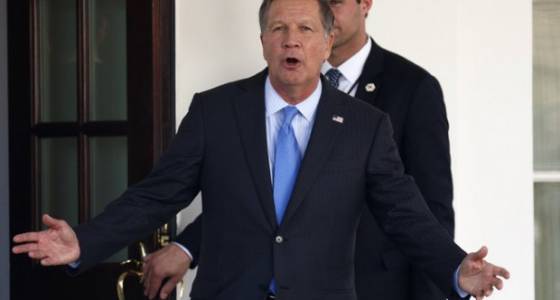 John Kasich meets with Donald Trump and other Republicans in D.C. to try to save Medicaid expansion. Ohioans have differing views on whether the new Democratic National Committee chair will attract or repeal Bernie Sanders voters. And David Pepper says time's running out for Democrats to jump in the 2018 race for governor. Today's Ohio Politics Roundup is brought to you by Jeremy Pelzer.

Kasich lobbies in D.C. for Medcaid expansion: Ohio Gov. John Kasich spent Friday and Saturday in Washington, D.C., trying to persuade President Donald Trump and his fellow Republicans to preserve Medicaid expansion -- an issue he has championed as governor but is now on the chopping block as the GOP eyes repealing the Affordable Care Act.

How Kasich's White House meeting went: On Friday, Kasich met with Trump at the White House about Obamacare, as well as a number of other issues. Afterward, Kasich - a vocal Trump critic and presidential primary rival - said the meeting was productive, according to cleveland.com's Stephen Koff. "He listened to me and as I said, you know, I'm on a plane and he's the pilot," Kasich told CBS's "Face The Nation." "And you know the fact is, I want the pilot to be successful. But you know what? Every once and a while ... you need to yell into the cockpit."

Kasich vs. congressional Republicans: The governor suggested on "Face the Nation" Sunday that conservative members of Congress would be the the biggest obstacle to passing an Obamacare replacement law. Kasich: "I think there are some very conservative Republicans in the House who are going to say just get rid of the whole thing. And that's not acceptable when you have 20 million people, or 700,000 people in my state, because where do the mentally ill go? Where do the drug addicted go?"

Jim Jordan's rebuttal to Kasich: "We didn't tell the American people we are going to repeal it, except we are going to keep the Medicaid expansion," said the Champaign County congressman, the co-founder of the conservative House Freedom Caucus, according to cleveland.com's Sabrina Eaton. "We didn't tell the American people, we're going to repeal it except we're going to keep some of the tax increases ... We told them we will repeal it and replace it with a market centered, patient centered plan that actually brings back affordable health insurance."

What Congress can agree on: Responding to a rash of bomb threats made against Jewish community centers around the country, including in Beachwood, Eaton reports. On Thursday, a bipartisan group of lawmakers (including all of Ohio's Democratic members of Congress and GOP Reps. Dave Joyce, Jim Renacci, Bill Johnson, Pat Tiberi, and Steve Stivers) wrote FBI Director James Comey, U.S. Attorney General Jeff Sessions and Homeland Security Secretary John F. Kelly demanding action to catch the perpetrators and improve security at the centers.

Is there something you want to tell your member of Congress? Eaton is offering a public platform for you to share it.

Perez elected DNC chair: Former Labor Secretary Tom Perez was elected as the new chairman of the Democratic National Committee on Saturday, beating U.S. Rep. Keith Ellison of Minnesota after a hotly contested race. Perez's win sparked questions about whether Bernie Sanders supporters (who rallied behind Ellison) can unite or will be further alienated from the Democratic Party.

David Pepper predicts unity: "With what Paul Ryan and Trump are doing, I'm confident we'll unite," the Ohio Democratic Party chair, one of the few state chairs to endorse Perez, told Vox's Jeff Stein. He also praised the "spirited, passionate" leadership election, saying that before now, "The DNC was a very stale organization -- every meeting was stale. It was buttoned up."

Northeast Ohio Bernie supporters had a different response: "In choosing Perez, the DNC chose to ignore what may have been the last and certainly was the best opportunity to unify the progressive and establishment wings of the party and perhaps even keep many progressives working within the party," the Cuyahoga County Progressive Caucus, created by Sanders volunteers last year, wrote in a statement. The caucus pledged to work with Democrats "to move the progressive agenda forward in Northeast Ohio whenever possible," though it vowed to work outside the party "when this is not possible."

Also playing a role in the DNC chair election: Dayton Mayor Nan Whaley, who gave the nominating speech Saturday for a third DNC chair candidate, South Bend, Indiana Mayor Pete Buttigieg. Buttigieg, who impressed many during the race but didn't have the votes to win, announced during his nomination speech that he was dropping out.

Pepper says time's running out for gov hopefuls: It seems that just about every Democrat in Ohio is considering a run for governor in 2018. But so far, none of them have officially entered the race yet, and Pepper indicated to WVXU's Howard Wilkinson that would-be candidates can't stay on the fence much longer. "The time to start organizing campaigns is now,'' Pepper said. "There is no time for exploratory committees and thinking about it. It is time to get on with it."

ICYMI: Our initial round of Ohio Matters stories wrapped up Friday with looks at Vinton County and suburban Franklin County. If you haven't already, also check out our earlier stories on the political lay of the land in Seneca, Greene, Cuyahoga, and Jefferson counties.

Guess who's not coming to dinner? Sandusky County Republican Chairman Justin Smith, not U.S. Sen. Rob Portman, made the decision to to prevent Democrats from attending a political dinner where Portman spoke Wednesday, the Dispatch's Kat Tenbarge writes. Smith says he remains proud of the choice to exclude liberals who bought tickets to attend a Lincoln Day dinner held by the Sandusky County Republican Party and its Seneca County counterpart. Portman's office helped persuade party officials to refund tickets bought by potential protesters.

Spousal support: Cranley's wife Dena, who mostly kept to the sidelines during her husband's 2013 campaign, is playing a more prominent role this year, Williams writes. Her involvement is part of an effort by Cranley's campaign to push back his reputation of being hot-headed and combative by presenting him as "a laid-back, fun-loving family man."