VANCOUVER—John Furlong received a standing ovation at a University of British Columbia fundraiser Tuesday while protesters gathered outside to draw attention to what they called the “silencing” of First Nations people who have accused... 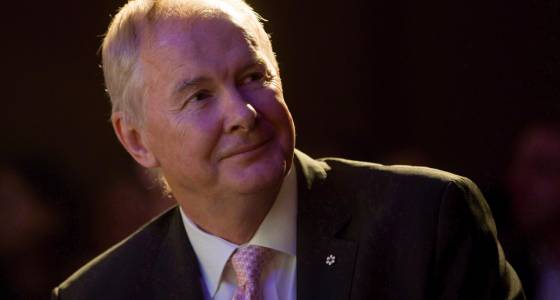 VANCOUVER—John Furlong received a standing ovation at a University of British Columbia fundraiser Tuesday while protesters gathered outside to draw attention to what they called the “silencing” of First Nations people who have accused him of abuse.

The keynote speech by the former Vancouver Olympics CEO at the student athletics event has been a source of controversy after the university cancelled it in December before president Santa Ono apologized and invited Furlong back.

After Furlong took the stage in Vancouver’s convention centre to thunderous applause from donors and young athletes, a video was played of triumphant moments from the 2010 Olympics set to rousing music. He said he was “very, very moved.”

“I’ve had a few challenges come my way in the past few years that I’d rather not have had to face, but I’ve had to,” he said. “I’ve also discovered that life doesn’t treat everybody fairly. Fair just doesn’t enter into it. But feeling sorry for yourself isn’t worth the time of day and it’s not becoming.”

Furlong has vehemently denied allegations contained in a 2012 newspaper article that he beat and taunted aboriginal children while working as a gym teacher in Burns Lake, B.C., in 1969 and 1970.

He dropped his defamation lawsuit against journalist Laura Robinson, so the allegations contained in her article have not been tested in court. However, Robinson lost her own defamation suit against Furlong, with a judge ruling her reporting constituted an attack on his character.

Furlong’s speech, aimed at inspiring young athletes, touched on some familiar notes, with stories about his upbringing in Ireland and work as a high school athletics coach in Prince George, B.C., in the mid-1970s. While he omitted his time in Burns Lake in his autobiography, on Tuesday he mentioned working as a teacher “for a while.”

He revisited a quote from his father, who he said taught him how to deal with times of hopelessness and despair, when “rumours abound” and the walls feel like they’re closing in. His father told him to ask himself: “What is true?”

“I have relied on that and it’s helped me immensely,” he said.

The university’s about-face on Furlong has drawn criticism from all sides.

After his speech was cancelled, there were threats on social media to stop donating to the school. But after Ono brought him back, several indigenous professors registered their disapproval, with one resigning from a committee that was working on the school’s new sexual assault policy.

On Tuesday, Ono praised Furlong and thanked him for “graciously bearing with us over the last few months.”

“John is an icon. He’s a champion for amateur sports in Canada and around the world and is especially well-qualified to speak at this event today. It is because of him that this city and this nation celebrated the Vancouver Olympics.”

About a dozen protesters gathered outside the convention centre holding signs that read “It’s time to listen” and “We stand with the Babine Lake survivors,” referring to a First Nations community in Burns Lake.

Demonstrators protested silently to reflect the “ongoing silencing” of people who have accused Furlong of abuse, according to an email announcing the protest. The email said members of the Burns Lake community have reached out to Ono but they haven’t received a response.

Ono said after the event that he would be happy to speak with people who have contacted him from Burns Lake at an “appropriate moment.”

“I really appreciate their reaching out to me and I certainly am very sympathetic to their situation,” he said.

Claire Hunter, a lawyer for Furlong, said last month that he has consistently stated he is innocent and pointed to the ruling in Robinson’s case, which included testimony from a nun who said Furlong was “kind and respectful” to students and she never saw him use the strap.