Joe Mauer's lock on No. 3 lineup spot for the Twins is not a certainty

FORT MYERS, Fla. – For the first time this spring, Paul Molitor will write the name “Mauer” on his lineup card Wednesday. He’ll put some thought into it, but this is only practice. The real test comes in five weeks, when Molitor sorts... 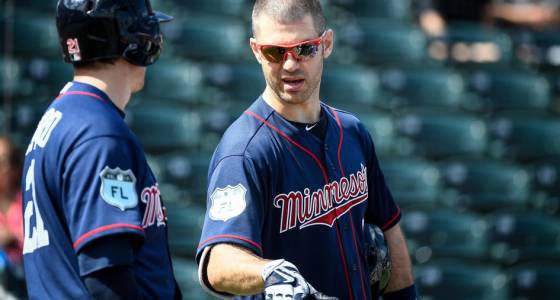 FORT MYERS, Fla. – For the first time this spring, Paul Molitor will write the name “Mauer” on his lineup card Wednesday. He’ll put some thought into it, but this is only practice. The real test comes in five weeks, when Molitor sorts out the Twins lineup for regular season games. For that, he’s calling meetings.

“I’m having discussions with people, getting input from the staff,” the Twins manager said. “I talked to Joe a little bit, too, about kind of waiting to see how it unfolds here.”

There’s a reason for that. The question of where to slot the three-time batting champion is becoming a ticklish matter as Mauer reaches the later stages of his career. He was once a dominating offensive weapon who peppered hits all over the diamond or over the fence, the focal point of Minnesota’s offense in the No. 3 slot.

That placement required no thought on the part of his managers, Ron Gardenhire and Paul Molitor, no angling for an advantage. Mauer’s potency was obvious, as was his rightful realm: It’s been nearly 11 years since Mauer batted lower than third in a starting lineup.

But the streak may be near an end. Mauer’s contributions are more subtle now, his dominance over AL pitchers fading, a fact magnified by his former brilliance. As he nears his 34th birthday seven weeks from today — that same week, he should become only the sixth man ever to appear in 1,600 Twins games — his ability to make contact with a baseball has become ordinary, his ability to drive it even less.

Mauer batted .261 last season, the lowest of his career and 47 points below his career .308 mark. He collected only 22 doubles, or fewer than he had before the Fourth of July in 2010. Whereas he could once punch ground balls through the infield for hits — he batted nearly .300 on grounders alone during his MVP season in 2009 — now they’ve become nearly automatic outs (.171 in 2016).

A declining Mauer, however, is a long way from a worthless one. The veteran first baseman still works counts better than most of his teammates, and is dangerous when he gets an advantage. He batted .362 when he was ahead in the count in 2016, far better than the .302 MLB average. He drew 79 walks in 134 games, which ranked ninth in the AL, and his .363 on-base percentage tied him for 10th in the league.

Where he bats is up to the manager, Mauer repeated several times. But yeah, he has a preference.

“I’ve always wanted to bat near the top of the order, because you get more chances there,” Mauer said. “There’s a good chance of having guys on base, too, which is what every hitter wants.”

It’s not clear yet what Molitor wants. He used 148 different starting lineups in 2016, and never settled for longer than three weeks on a spot for Mauer. The first baseman batted third 66 times, second 51 times and, for the first time in his career, even led off for eight consecutive games in mid-May, a tactic that didn’t go well, albeit in what Molitor points out was “kind of a small sample size.”

Mauer, who was leading the AL in on-base percentage with a .420 mark when Molitor promoted him to the top of the lineup, collected only five hits and four walks in those eight games, a .156 average and a .250 on-base percentage. The Twins went 2-6, and Molitor ended the attempt.

It’s possible that experiment could be revived this year, Molitor said. Or perhaps Mauer could remain in that No. 3 spot, particularly against righthanded pitchers.

“I still like Joe up there somewhere, against righthanded pitching in particular,” Molitor said. “We’ll see how it fits together.”

The manager has also confronted the possibility that the time has come to shift the former batting champion to the lower half of the lineup. Yet that decision might not hinge entirely on Mauer’s results.

“A lineup, how it’s going to end up, it can change,” Molitor said. “I’m not going to tell you exactly [what he will do], because how Buxton comes along, how that’s going to affect [Brian] Dozier — it’s sort of a trickle-down there as to how people can go.”

In other words, if Buxton’s conspicuous improvement last September, which so far has carried over to his early work in spring training, remains constant, he’s a possibility for the leadoff spot, rather than ninth, where he’s spent most of his career. Dozier was the leadoff hitter 73 times last season, more than any other Twin, and hit 27 of his 42 home runs from that position, including six leading off the first inning. That’s part of the problem, though: Of those 27 home runs Dozier hit while a leadoff hitter, 21 came with the bases empty.

Which is why Molitor is giving so much consideration to where he’ll bat his oldest regular this year. And if it’s atop the lineup, Mauer will feel a certain responsibility that goes along with it.

Molitor also raised the potential for a lineup makeover when left-handed pitchers are on the mound. Mauer batted just .224 against lefties, lowest since his rookie season, though he regards that number as a blip, a normal fluctuation that he intends to correct this year.

“I wouldn’t say struggled against lefties. I didn’t have many chances against them, and a lot of the lefties I see, it’s a reliever who I don’t see much of,” he said. “The numbers were what they were, but I wouldn’t read into it too much.”

But what would he read into seeing his name near the bottom of the lineup card?

“I’m not going to complain, you know that,” Mauer said. “I’ve told him numerous times, whatever you feel gives us the best chance to score runs, I’m for it. I want what’s best for the team.”