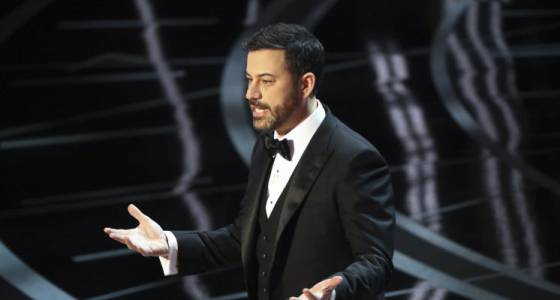 From blue ribbons on the red carpet supporting the American Civil Liberties Union to host Jimmy Kimmel's jabs, the Oscars shaped up an entertainment industry stand against President Donald Trump's policies and tweets.

"We're at the Oscars . . . ," Kimmel reminded his Dolby Theatre audience. "Some of you will get to come up here on stage and give a speech that our president will tweet about in all caps during his 5 a.m. bowel movement tomorrow."

In his first turn hosting the Oscars, Kimmel didn't pull any punches at the Republican elephant in the room.

"I want to thank President Trump," Kimmel said in his opening monologue. "Remember last year when it seemed like the Oscars were racist?"

The #OscarsSoWhite that dogged the academy two years running was smoothed this year with seven nominated actors of color and four best picture finalists with culturally diverse themes. Kimmel still didn't let Hollywood off the hook.

"It's been an amazing year for movies," he said. "Black people saved NASA (in Hidden Figures) and white people saved jazz (in La La Land). That's what you call progress."

Yet much of Kimmel's monologue was aimed at President Trump, including his tweet after Meryl Streep's unflattering Golden Globes speech in January. Trump called the 20-time Oscar nominee "one of the most over-rated actresses."

"We're also here to honor actors who seem great but actually are not," Kimmel said. "One in particular has stood the test of time for her many overrated and uninspiring performances."

Kimmel urged the crowd into "a totally undeserved round of applause" for Streep who "has phoned it in for more than 50 films over her lackluster career."

The audience responded with a standing ovation. When applause faded, Kimmel tossed in the kicker:

Acceptance speeches were expected to be laced with political commentary throughout the ceremonies. The Oscars are annually one of the year's most viewed telecasts worldwide with up to 40 million viewers in the U.S. alone.

"The policies of this administration are abhorrent, and they will not last," Affleck said Saturday. "They are really un-American. I know this feels preachy and boring, and I'm preaching to the choir, but I'm just adding my voice to the chorus."