About 100 headstones were knocked over at a Jewish cemetery in Philadelphia, authorities say. "It's criminal. This is beyond vandalism," Northeast Detectives Capt. Shawn Thrush told philly.com on Sunday. "It's beyond belief." Mount Carmel Cemetery is... 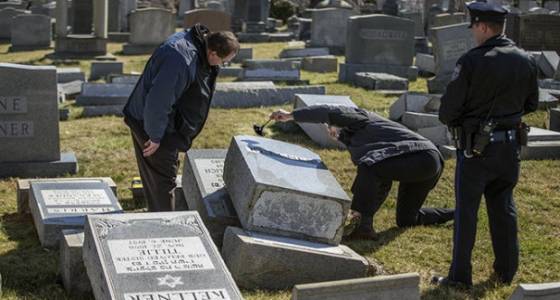 About 100 headstones were knocked over at a Jewish cemetery in Philadelphia, authorities say.

"It's criminal. This is beyond vandalism," Northeast Detectives Capt. Shawn Thrush told philly.com on Sunday. "It's beyond belief."

Mount Carmel Cemetery is in the city's Wissinoming section, the news website said.

My heart breaks for the families who found loved ones' headstones toppled. We stand w/our Jewish brothers & sisters https://t.co/tBq9Mtxtqr

Philadelphia Mayor Jim Kenney said, "We are doing all we can to find the perpetrators who desecrated this final resting place, and they will be prosecuted to the fullest extent of the law."

He added that his "heart breaks for the families who found their loved ones' headstones toppled this morning. ...  Hate is not permissible in Philadelphia."

The vandalism of Jewish headstones at a Phila. cemetery is a cowardly, disturbing act. We must find those responsible and hold accountable. https://t.co/6eM0G2tC4S

In recent weeks there were 30 headstones toppled at another Philadelphia cemetery and nearly 200 headstones were damaged at Jewish cemetery outside St. Louis, pennlive.com said.

The Anne Frank Center for Mutual Respect called on President Trump to "deliver a prime-time televised speech, live from the Oval Office, on how you intend to combat not only #Antisemitism," but also #Islamophobia and other rising forms of hate."

Jewish graves in Philadelphia now vandalized. Stop this incubator of #Antisemitism and other hate. WE BEG YOU @POTUS @realDonaldTrump pic.twitter.com/RHuIjdE2Yg

Vice President Mike Pence last week visited the cemetery near St. Louis and called the vandalism there a "vile act."

"We condemn this vile act of vandalism and those that perpetrate it in the strongest possible terms," Pence said, according to pennlive.com