ISIS thugs strapped a bomb to this puppy

Animalistic ISIS jihadists turned a fuzzy little pooch into a suicide bomber, but the cute dog survived thanks to several warm-hearted Iraqis, according to a new video.The shocking footage shows three Iraqi soldiers in the fight against the Islamic State... 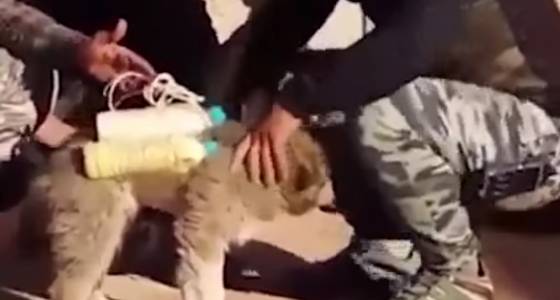 Animalistic ISIS jihadists turned a fuzzy little pooch into a suicide bomber, but the cute dog survived thanks to several warm-hearted Iraqis, according to a new video.

The shocking footage shows three Iraqi soldiers in the fight against the Islamic State bent over the puppy strapped with four bottles containing explosives with electrical wires attached.

As they defuse the miniature bomb vest, the soldiers turn to the camera and discuss ISIS’s suicide attacks while petting the frightened pooch.

The device was successfully disarmed before it could explode and cause injuries or death, The Daily Mail said.

ISIS warriors allegedly sent the little dog across battle lines to do their dirty work as they have become more desperate in recent months.

Many of ISIS’s top leaders and other military personnel have been slaughtered by American-led coalition forces. The once venerable terror group has also relinquished large swaths of land they formerly controlled in Iraq to the coalition.

But the Islamic State still has a stranglehold over Iraq’s second-largest city, Mosul, and its makeshift capital in Raqqa, Syria.

Coalition forces have been launching attacks against ISIS in Mosul to reclaim the city. They are also preparing to invade ISIS in Raqqa.