Inflatable protest rat gets chased off by even bigger cat

One of the inflatable rats that plague Big Apple construction sites got chased off Friday — by an even bigger inflatable cat!A union that’s cheesed off at getting shut out of a lucrative facade-renovation job set up the rat across from Grand Central... 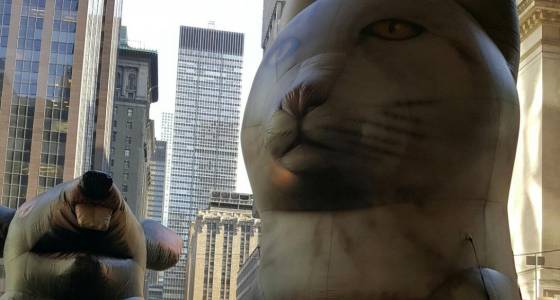 One of the inflatable rats that plague Big Apple construction sites got chased off Friday — by an even bigger inflatable cat!

A union that’s cheesed off at getting shut out of a lucrative facade-renovation job set up the rat across from Grand Central Terminal around 10 a.m. in protest against contractor MDB Development Corp.

But the building’s corporate owner, the Empire State Realty Trust, brought in its own feline balloon to overshadow the rat about an hour later, according to sources familiar with the matter.

Members of Local 1 of the Bricklayers and Allied Craftworkers union quickly turned tail, deflating their rat and scurrying away.

“It was pretty hilarious,” said a banker who works in an nearby building.
“The cat went right up to the scaffolding. It could have easily kicked that rat’s ass.”

Inflatable rats are typically used to protest the hiring of non-union workers, a practice approved by the National Labor Relations Board in 2011.

But Local 1’s picket line outside One Grand Central Place grew out of its long-simmering turf war with a rival organized-labor group, Local 339 of the United Service Workers, which was hired by MDB, sources said.

Local 1 protested in front of the building with the rat on Thursday, several neighborhood workers said.

Neither the unions, MBD nor Empire State Realty — which also owns its namesake landmark skyscraper — returned requests for comment.