In Trump’s first speech to Congress, will decorum hold?

WASHINGTON >> A presidential speech to Congress is one of those all-American moments that ooze ritual and decorum.The House sergeant-at-arms will stand at the rear of the House of Representatives on Tuesday night and announce the arrival of Donald Trump... 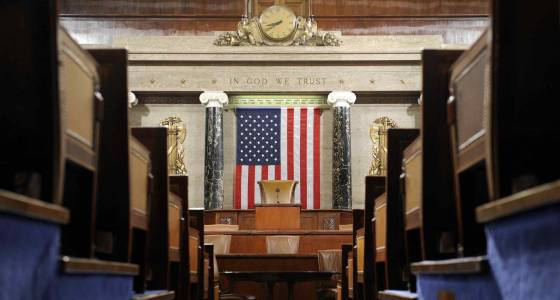 WASHINGTON >> A presidential speech to Congress is one of those all-American moments that ooze ritual and decorum.

The House sergeant-at-arms will stand at the rear of the House of Representatives on Tuesday night and announce the arrival of Donald Trump before a joint session of Congress by intoning: “Mister Speaker, the President of the United States” just like always.

Trump will stride down the center aisle to lusty cheers and hearty handshakes from his Republican supporters. First lady Melania Trump, accompanied by special guests, will smile from the gallery above.

From there, though, the president who favors disruption over decorum can take the night in any number of directions. So can the Democrats who oppose him.

The White House is promising that Trump’s first address to Congress will be a forward-looking one about the “renewal of the American spirit.”

The speech offers Trump an opportunity to stand before millions of viewers around the United States and the world, and try to reframe his presidency after a chaotic opening in which he’s rattled world leaders, railed against leaked information, engaged in open warfare with the press and seen his signature effort to halt some immigration thwarted by the courts. He probably will stress early achievements such as his nomination of Judge Neil Gorsuch for the Supreme Court and a series of executive orders to rein in government.

But the staid setting of the House chamber doesn’t play to Trump’s strengths. He captured the White House with his say-anything style at raucous campaign rallies and his red “Make America Great Again” ball cap.

Trump has shown he can stick to a script, but not necessarily the one people expected.

His inaugural address, typically a moment for optimism and gauzy possibilities, was a darkly sketched recitation of “American carnage.”

His speech at the Republican convention last summer offered a similarly apocalyptic pledge to save the U.S. from Hillary Clinton’s record of “death, destruction, terrorism and weakness.”

“We’ve been fooled previously,” says Aaron Kall, director of debate at the University of Michigan. “We keep waiting for the pivot, but it hasn’t yet materialized.”

There also are big questions about how Democrats will choose to show their opposition to the president, especially if they are emboldened by the vocal Trump opponents who have turned out in force at legislators’ town-hall meetings in their home districts over the past few weeks.

Already, Democrats have made a point of inviting immigrants and foreigners to attend Trump’s speech as a choreographed counterpoint to his exclusionary immigration policies.

There is no shortage of bad blood between the Democrats and Trump. He has mocked their Senate leader, Chuck Schumer of New York, as the “head clown,” as a “lightweight” and for crying “fake tears” on behalf of those blocked from entering the U.S.

Likewise, the president still has work to do within his own party.

The president so far appears on friendly terms with congressional Republicans. He speaks often by phone with House Speaker Paul Ryan, R-Wis.

But GOP legislators are getting impatient for details of the president’s positions on top issues such as a tax overhaul, repealing President Barack Obama’s health care law and trade policy.

They’re also wary of some of Trump’s more unrestrained ways of expressing himself.

Senate Majority Leader Mitch McConnell, asked what he wanted to hear from Trump on Tuesday, told a Chamber of Commerce crowd in Kentucky last week: “A tweet-free, optimistic and uplifting message about where America needs to go.”

While the traditions of Congress demand manners and cordiality, plenty of drama has unfolded over the years in the interplay between presidents and legislators during State of the Union speeches and other formal addresses, such as Tuesday’s.

During Obama’s September 2009 address to a joint session of Congress on health care, Rep. Joe Wilson, a South Carolina Republican, blurted out “You lie!” It was seen by many as a breathtaking show of disrespect. Groups of Republicans also showed their displeasure with Obama in more subtle ways, by snickering or not applauding.

Michael Waldman, chief speechwriter for President Bill Clinton, said Trump can easily “blow up a speech” with just a few deviations from the text on his teleprompter.

Waldman said that pointed opposition from Democrats could throw Trump off his game, as well.

“How will he respond when several hundred Democratic members of Congress are not giving him the love he’s hoping for from the audience?” Waldman asks. “There’s never been anybody who’s stood there before, who’s responded to audiences with as much extemporaneous venom.”

Kall says heckling from Democrats or others in the chamber could be just the thing that energizes Trump and gives his speech extra zing.

Tuesday’s speech will be Trump’s first visit to the Capitol since his inauguration. He visited once during the transition and testified before congressional panels a few times in his years as a businessman.

He also met Republican lawmakers a number of times while he was a candidate, and in general those meetings went pretty well. Lawmakers would often remark on how different he was in person than the flame-thrower they saw on TV.