In the Trump era, the fringe takes over conservative movement | Toronto Star

OXON HILL, MD.—The governor of Kentucky was up on stage talking about cutting red tape. In the hallway outside, a white supremacist was promoting the racist “alt-right,” 20 journalists in a circle around him.The bigot, Richard Spencer,... 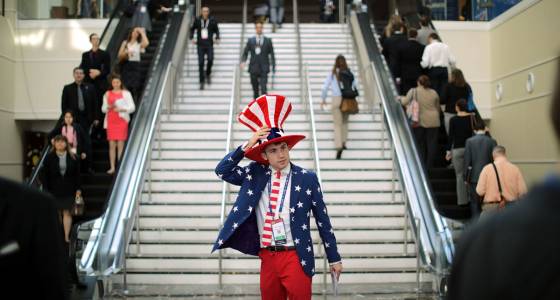 OXON HILL, MD.—The governor of Kentucky was up on stage talking about cutting red tape. In the hallway outside, a white supremacist was promoting the racist “alt-right,” 20 journalists in a circle around him.

The bigot, Richard Spencer, was soon tossed out of the building by a security guard. Three days after rescinding a speaking invitation to alt-right icon Milo Yiannopoulos, the organizers of the Conservative Political Action Conference were making another belated statement of principle: The conservative mainstream would not tolerate such odious views.

But it is tolerating a lot more than it used to.

This year’s CPAC, which ended Saturday, was less an indication of a battle for the soul of conservatism than evidence that conservatism is now what President Donald Trump says it is. With a conspiracist openly hostile to Muslims running the world, the gap between the kooky fringe and the centre of the movement has vanished. And on issues from Islam to trade to Russia, the centre has shifted to fall in line with Trump’s worldview.

“By tomorrow this will be TPAC here, no doubt,” Trump counsellor Kellyanne Conway said to open the conference, and it wasn’t much of a joke.

CPAC, held at a hotel in the Maryland suburbs of Washington, is far from the Rust Belt and Bible Belt towns widely depicted as the heart of the Trump base. Libertarians, seniors from liberal-leaning northern Virginia and suspiciously well-coiffed 20-year-olds seeking careers as Republican operatives make up a disproportionate percentage of the crowd.

Even there, there was no sign of a dissident movement. Trump had 15-per-cent support in the CPAC “straw poll” during the campaign last year. His approval rating in this year’s straw poll was 86 per cent.

The people filing in on Thursday found on their chairs a free issue of the Weekly Standard, the conservative magazine founded by establishment anti-Trumper Bill Kristol. There was no doubt, however, which publication now ruled the roost: Breitbart News, the website selling “Border Wall Construction Company” T-shirts from a prominent booth in the basement.

Seven Breitbart figures appeared on CPAC panels. Not including the Breitbart man who now serves as chief strategist to the president.

As Breitbart’s chief executive, Stephen Bannon used to antagonize the conference organizer, the American Conservative Union, by hosting a counter-event called “the Uninvited” for speakers deemed too incendiary on issues like Islamist extremism. On Thursday, he was interviewed on stage by the head of the ACU – swaggering like a guy who went out and bought the nightclub that once turned him away at the door.

“Matt, I want to thank you for finally inviting me to CPAC,” Bannon said with a smile.

“Here’s what we decided to do at CPAC with the uninvited,” Matt Schlapp responded. “We decided to say that everybody’s a part of our conservative family.”

There were still a few governors and House Representatives on stage, still a few references to Barry Goldwater. There was also Milwaukee County Sheriff David Clarke, the left-baiting Trump devotee. Two years ago, Nigel Farage, then the leader of the anti-immigration U.K. Independence Party, spoke to a nearly empty room. This year, as a Trump ally and triumphant Brexit engineer, he got a standing ovation.

One of the uninvited in 2013 and 2014 was Frank Gaffney, the anti-Muslim “security” advocate. By last year, Gaffney was moderating panel discussions in a side room at CPAC. His colleague Clare Lopez was allowed to speak this week from the main ballroom stage, where she warned of a supposed Islamist plot to infiltrate Canada.

“Our friends up there are in trouble right now,” she said. “Our Canadian friends need our help and support.”

Lopez may not have been the fringiest speaker: Writer Trevor Loudon warned of a century-old alliance between Muslims and Bolsheviks. Even CPAC’s hardline regulars managed to escalate their rhetoric. Wayne LaPierre, the National Rifle Association chief executive known for aggressive speeches, argued at length that every element of the American left is “willing to engage in criminal violence to get what they want”: the destruction of “not just our country but also western civilization.”

Thousands lined up to hear a Thursday speech by Vice-President Mike Pence, who had spent his pre-Trump career advocating free trade. At the same time, a smaller crowd assembled in a side room to watch a panel discussion titled “Free Trade, Fair Trade or Phony Trade,” where the participants included Breitbart editor Joel Pollak and Ed Schultz, the former MSNBC progressive firebrand who now works for RT, a Russian 24-hour English-language network.

Both the roster and the title would have been unthinkable in the pre-Trump era. But Trump likes Russia and doesn’t like free trade and millions of Republicans have been persuaded that he is right.

Three years ago, Russian President Vladimir Putin had a 10-per-cent approval rating among Republicans, a YouGov poll found. In December, it was 37 per cent. Two years ago, 51 per cent of Republicans thought free trade had been good for the United States, 39 per cent bad. By August, near the end of Trump’s campaign, 32 per cent said good, 61 per cent said bad.

Devon Flynn, a George Mason University graduate, had been a supporter of Marco Rubio, the conventional pro-trade, anti-Russia Florida senator once touted as the future of the party. “It was very hard,” he said, “to transition from Rubio to Trump.”

Like almost everyone else at CPAC, he figured out how to get there.

“I’m not a full gung-ho Trump supporter, but at the same time, he’s our president and, so far, what he’s put in place, I don’t see a problem with,” said Flynn, 25. “Now that we have Donald Trump as president, a lot of people are jumping on board that have different views — moderates all the way to Tea Party — because we see: What he said he would do, that’s what he’s doing.”

Around the corner, his peers were standing in a 30-person line to take photos with Ken Bone, the guy in the red sweater who asked a question during the second presidential debate, became an Internet sensation for reasons that are not entirely clear, and is now employed by a software company.