President Trump, eager to find a rationale for his program to cleanse the country of undocumented immigrants, continues to link such immigrants to rising crime rates and gang violence. It’s a falsehood he has employed repeatedly, both as a candidate... 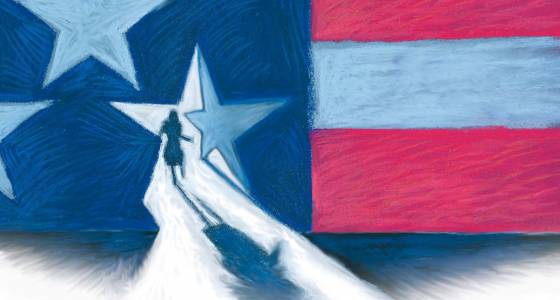 President Trump, eager to find a rationale for his program to cleanse the country of undocumented immigrants, continues to link such immigrants to rising crime rates and gang violence. It’s a falsehood he has employed repeatedly, both as a candidate and now as president. As recently as Thursday, Trump said that “you see gang violence that you’ve read about like never before, all of the things, much of that is people that are here illegally.”

But there is no evidence to back up that claim. In fact, study after study has found that immigrants actually commit fewer crimes than the population at large. That makes sense. Immigrants, whether legal or illegal, sacrifice much to come here. Most want to make good and are rightfully fearful that until they become citizens, any infraction could jeopardize the new life they’ve made for themselves. Experts on the right and left have said there simply is no support for the notion actively fostered by Trump that undocumented immigrants commit a disproportionate share of crime.

In fact, the libertarian Cato Institute noted in a recent report that “no matter how researchers slice the data … the numbers show that immigrants commit fewer crimes than native-born Americans.”

Minnesota has an estimated 80,000 to 90,000 undocumented immigrants. In some small towns, like Worthington, they make up a significant part of the population and have helped revive local economies. They are line cooks and meatpackers and cow milkers. They generally take the jobs that are too hard, too dirty and too low-paid to attract many takers at a wage employers can afford. The disruption that would come from large-scale deportation efforts seems unimaginable.

Trump already has the authority to enforce existing immigration law. There is no need to demonize those in his sights. From the outset of his candidacy, he has equated undocumented immigrants with criminals — “They’re bringing drugs. They’re bringing crime. They’re rapists.” In his executive order, he went so far as to label them “a significant threat to national security and public safety.” His order would go after not just convicted criminals, but those charged with a crime and those not charged at all.

Few would object to deporting individuals who are convicted of crimes and unable to lead productive lives here. There will be far less support, we suspect, for forcibly removing a young El Salvadoran mother from a hospital by wheelchair after she was diagnosed with a brain tumor and locking her in a detention center. Is this what Trump thinks will “Make America Great Again”?

This may surprise the president, who doesn’t like to be bothered with details, but even undocumented immigrants have some rights. They are innocent until proven guilty. They have the right to due process and equal protection. In its wisdom, this nation of immigrants — unlike many countries — granted some rights to all who dwell here.

The dirty little secret is that this country has long had an uneasy bargain with illegal immigration. Despite the laws on the books, most undocumented immigrants find jobs. That’s because they provide employers with a source of cheap labor that works hard and demands little. In some instances, companies have recruited such workers.

Tightening up this nation’s borders should be a priority, for all kinds of reasons. Instead of another hastily concocted executive order, we would advise the president to begin working with his Republican-led House and Senate. Let them forge the comprehensive immigration reform this nation so badly needs and which Congress has so long avoided.