Elvira Arellano returned to the U.S. from Mexico knowing the risks. But she also knew her family was in danger and her American-born son needed to come home.Now Arellano, the twice-deported immigration activist whose year living inside a Humboldt Park church... 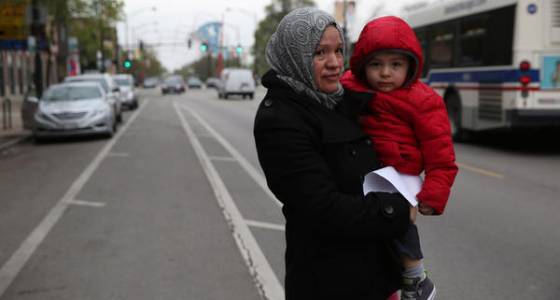 Elvira Arellano returned to the U.S. from Mexico knowing the risks. But she also knew her family was in danger and her American-born son needed to come home.

Now Arellano, the twice-deported immigration activist whose year living inside a Humboldt Park church about a decade ago made her a lightning rod in the nation's immigration debate, awaits her fate as she prepares to meet with federal authorities.

On Wednesday, Arellano, 42, is scheduled for an annual check-in with Immigration and Customs Enforcement in Chicago, the third such appointment since she returned to the U.S. in 2014. There, she and her lawyer plan to tell immigration authorities that she's still waiting for a hearing on her petition for political asylum, which she filed three years ago. She hopes authorities will allow her to remain.

The routine appointments — part of a parole system for people living in the U.S. illegally — have become dicey for some immigrants since President Donald Trump's administration stepped up enforcement and expanded the pool of immigrants who are targeted for removal.

In 2006, Elvira Arellano took refuge with her 7-year-old son inside Adalberto United Methodist Church in Humboldt Park. Arrested four years earlier as part of a post-9/11 sweep of immigrants who were in the U.S. illegally, Arellano became the face of the new sanctuary movement. She was arrested and deported in 2007 after leaving the church, but returned in 2014 and has applied for protected status. She is now again living in Humboldt Park.

In Phoenix, a single father of three U.S.-born children reported to a regular meeting to discuss his request for asylum and was deported the next day. In Denver, a mother of four fearful of that same fate skipped her meeting and sought sanctuary in a church like Arellano did a decade ago. Meanwhile, other immigrants have gone to their check-ins and been allowed to stay in the U.S.

Arellano plans to check in as planned. Her son Saul, 18, will accompany his mother and 3-year-old Mexican-born brother Emiliano. Forced to say goodbye to his mother surrounded by armed federal agents 10 years ago, Saul Arellano hopes it won't come to that again.

"Our families made the struggle coming here and sacrificing their lives," he said. "It's now our time to fight for them because they have rights as human beings. It's time for the youth to rise up and fight for our parents … We're not going back any more. We're going forward."

Supporters of Trump's efforts to increase deportations have said people like Arellano exemplify the arrogance of immigrants who are here illegally but believe they have a right to stay. Arellano broke laws, including coming to the U.S. more than once without legal documentation, and shouldn't be allowed to remain, they say.

Arellano's journey as an activist began in the late 1990s when the economy collapsed in her Mexican home state, Michoacan. Like many women, Arellano went to work in a maquiladora, a factory on the U.S. border, making only $5.60 a week. After crossing the border once unsuccessfully, she tried again in 1997 and headed for Yakima, Wash., to join family.

She worked as a baby-sitter and had Saul. In 2000, she moved to Chicago, where she joined other family members and took a job vacuuming planes at O'Hare International Airport.

Months after the Sept. 11, 2001, terrorist attacks, federal agents came to her house in Chicago at dawn as part of Operation Tarmac, a nationwide sweep of airport employees living in the U.S. illegally. In addition to re-entering the country illegally after a prior deportation, Arellano had been working with a fake Social Security number. A federal defender convinced her to plead guilty to a felony and removal proceedings began, said her attorney Chris Bergin.

U.S. Rep. Luis Gutierrez and a delegation of activists and lawyers staged a sit-in at the regional offices of Immigration and Customs Enforcement after their demands were not met during an hourlong meeting Monday with agency officials.

U.S. Rep. Luis Gutierrez and a delegation of activists and lawyers staged a sit-in at the regional offices of Immigration and Customs Enforcement after their demands were not met during an hourlong meeting Monday with agency officials.

Arellano, a shy but fierce mother, fought every turn of her case. She was granted at least three stays of deportation. But in August 2006 she was told to report to the Department of Homeland Security for removal. Instead of showing up on the morning of her appointment, she stepped up to the pulpit of Adalberto United Methodist Church in the Humboldt Park neighborhood, vowing to stay in the church indefinitely with her then-7-year-old son, a U.S. citizen.

Arellano became the face of the new sanctuary movement, a political strategy in the U.S. that first unfolded in the 1980s. Drawing from sacred texts that teach loving thy neighbor and welcoming the stranger, churches and synagogues committed acts of civil disobedience by housing immigrants fleeing civil wars in Central America.

Though churches can't guarantee protection, they are generally off limits to law enforcement raids. In fact, a 2011 memo from the director of Immigration and Customs Enforcement further instructed federal agents to avoid "sensitive locations" including hospitals, schools and houses of worship unless there is an imminent risk.

Arellano stayed in the Humboldt Park church for a year. She was arrested in Los Angeles where she had traveled for an immigration reform rally and was deported that same day. Saul joined her a month later.

"Ten years since I took sanctuary, time has proved to us that what we did was correct," she said in a recent interview through a translator. "It's necessary to protect families. It's a place where families and children can go to wage that resistance."

Arellano's activism continued in Mexico, where she fought for better treatment of Central Americans traveling through to the U.S. to seek asylum. She dodged gunfire at rallies, received death threats and locked the doors of her home in Michocoan to prevent kidnappers from taking Saul. In 2014, she led a group of asylum seekers to the U.S. border and encouraged them to cross. She called Saul and suggested he join her in doing the same. He did and they were detained.

A U.S. citizen, Saul was quickly released. Elvira and then-5-month-old Emiliano stayed in detention for two days before they were released to petition for asylum. U.S. Rep. Luis Gutierrez, who has championed Arellano's case for the past decade, admits he was stunned.

"I was surprised. But Elvira's case is different now," he said. "She's been very outspoken in her criticism of the Mexican government. That puts you in a pretty delicate situation."

Bergin said Arellano met the "credible fear test," which qualified her to seek asylum. She was granted parole to await a hearing, he said. Last year, he asked ICE to extend that parole for a year while she continued to wait. He will ask for another extension on Wednesday.

"She's actually in good shape because she filed for political asylum and they still have not dealt with that," he said. "There's nothing they can do to her because that's all pending."

Still, Bergin concedes that because the rules are changing, nothing is guaranteed. Arellano is not worried. Previous check-ins have gone smoothly, she said. After every check-in, she has been able to renew her work permit and continue building a life in the U.S.

Right now, Arellano, who has a legal work permit, holds down two jobs — one preparing food at a Puerto Rican restaurant and another delivering the Chicago Tribune at dawn. Emiliano's father and Saul, who is set to graduate from high school in June, also work several jobs to help make ends meet. Only English is spoken at home with Emiliano, and so she is slowly learning the language herself.

But on a recent Sunday, Arellano stepped to the pulpit of Lincoln United Methodist Church in Pilsen and delivered a stirring rallying cry in Spanish. She urged Mexican nationals in the pews to vote in that country's 2018 election to affect change.

"Right now in (Mexico) there's also a political change," she said. "Now we're given the opportunity here as Mexicans to vote outside our country to elect the new president in 2018."

"The fight is here right now," she said.