Imagining a presser where the press has no pull: Mike Polk Jr.

(Press Secretary Sean Spicer swiftly enters the White House briefing room) SEAN SPICER: So if no one has any more questions I guess we're all good for today. Thank you everyone. (Spicer turns and begins to exit quickly. The entire press corps erupts in protest,... 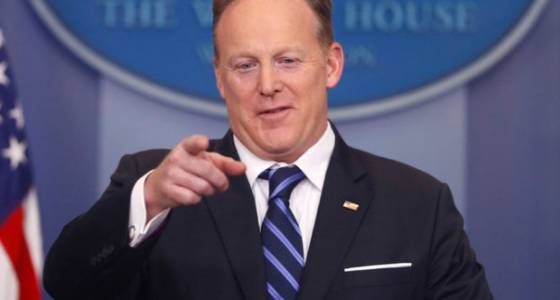 SEAN SPICER: So if no one has any more questions I guess we're all good for today. Thank you everyone.

(Spicer turns and begins to exit quickly. The entire press corps erupts in protest, forcing him to return to the podium)

SPICER: Fine! I'll take a FEW questions, but don't push me today, people.The outside of the toaster strudel I had this morning was burnt and the inside was still cold, so I am not in the mood for any nonsense. OK, I'll just pick a totally random news organization to start off with here -- how about Fox News?

FOX NEWS REPORTER: Wow! What a curveball! Just one quick question, Sean, does President Trump ever get sick of winning at everything all the time?

SPICER: See, now that right there is the sort of excellent question that confirms to me that you guys are a "Real News" outlet. And to answer your question, no. The president never gets sick of crushing it.

FOX NEWS REPORTER: I knew it! Thanks, Sean! You're the man!

CNN REPORTER: Sean, does the president plan to...

CBS NEWS REPORTER: Come on! No one even knows that channel is in their basic cable package!

FOX BUSINESS NETWORK REPORTER: Thanks, Sean. Here's my concern, when every single American becomes super wealthy as a result of President Trump's tremendous economic policies, who will be left to valet all of our luxurious sports cars?

SPICER: A valid concern. We have a congressional committee working on that issue right now. Who's next? Yes you, Infowars?

INFOWARS REPORTER: Yes, what is the administration doing to address the issue of the George Soros-funded moon colony where they brainwash teens into becoming gay?

SPICER: Holy cats! Even I can't think of a way to spin that! I'm just going to pretend like I misheard you and respond to something else. Yes, we ARE going to bring back the coal-mining industry!

CNN REPORTER: Sean. Can we ask one quick....

SPICER: Try me! Next question. Let's go with Redstate.com.

REDSTATE REPORTER: What is on President Trump's schedule for the rest of the day?

SPICER: Well, this morning he has a long, awkward handshake planned with the king of Norway. And this afternoon he's playing golf with political advisor Toby Keith, where the president will shoot a 70 and finish 2 under par.

SPICER: Guys! Wait for it! You will know when it's time, it will be obvious. Yes, next question. Breitbart News Network?

SPICER: Oh, right. You can stop in the new White House gift shop on your way out today and pick up an official Breitbart T-Shirt. OK, one more, who haven't we heard from? Ah, let's go with you, Cigar Aficionado Magazine.

SPICER: You are the fakest news!

CNN REPORTER: Sean, no one expects a president's first month in office to go seamlessly, but would you at least acknowledge that President Trump is off to a rocky start?

SPICER: Well, that's certainly the narrative that the liberal media is pushing, because they still can't get over the fact that President Trump dominated the election and destroyed their failed candidate, Crooked Hillary Clinton...

SPICER: Whoa! Settle down now, random White House briefing room spectators! The election is over. It's time for us to move on as a nation as we all work together to Make America Great Again!

(Spicer throws down a smoke bomb. Sprints out of briefing room as everyone coughs)